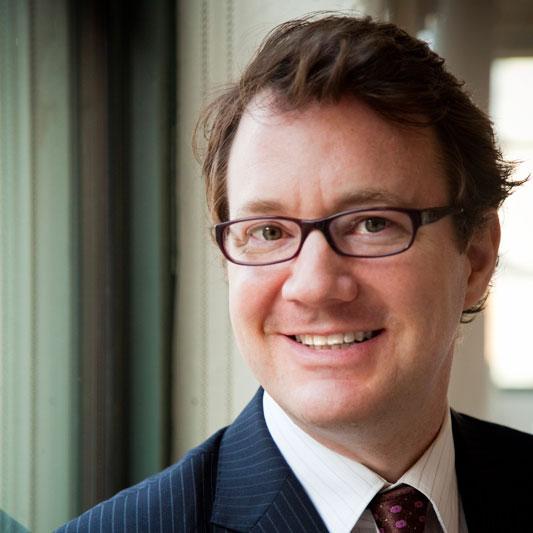 John Keefe is the Senior Editor for Data News. He's part of WNYC's Data News Team, which helps our journalists use and analyze data and also builds interactive maps, charts and data-driven projects. He tweets at @jkeefe.

John Keefe is the Senior Editor for Data News & Journalism Technology at WNYC, New York Public Radio. Keefe infuses WNYC's journalism with data reporting and interactive news applications, including census analysis, map mashups, news charts and SMS-based crowdsourcing projects.
Keefe builds maps and interactives using a combination of his own coding and free, online tools. In the spirit of public media, and in the public interest, Keefe also shares his processes so that others might learn from and build on them.

Keefe also teaches in the Journalism + Design program at The New School university in New York.

Previously, Keefe led WNYC's news operation for nine years and grew its capacity for breaking news, election coverage and investigative reporting. His career also includes work as a police reporter at the Wisconsin State Journal and the Racine Journal Times, as science editor for Discovery Channel Online and as president of a small digital production company. He is a former member of the Online News Association board of directors and was an advisor in the creation of CensusReporter, a data tool for journalists.

John Keefe appears in the following:

'Electionland' Looks at What Really Happened at the Polls

Derek Willis, News Applications Developer at ProPublica, and John Keefe, senior editor for Data News at WNYC, return to discuss what actually happened at the polls on Election Day.

Tackling Voting Obstacles at the Polls with ‘Electionland’

News organizations, including WNYC, will be tracking problems voters encounter at the polls during election day and reporting these issues while there's still time to change them.

Electionland: The Essential Guide for The Race to The White House

The future is here. Today, a coalition of news organizations is bringing the world real time election analysis based on web analytics and other data in a project known as Electionland.

Join WNYC Studios to learn how the leading producer of premier audio content engages and activates audiences beyond their ear buds. Part of the Fast Company Innovation Festival.

Tackling Voting Obstacles at the Polls with ‘Electionland’

Makers in the Making

Turns out, it is actually not hard or expensive to make a sensing, communicating object yourself.

'Electionland' Wants to Empower Voters at the Polls

“Electionland” alerts reporters of any issues that voters encounter at their polling places in real time.

Tracking the Temperatures on the Harlem Heat Island

In the midst of the city's first official heat wave this year, hear how you can get involved in WNYC's study to track temperatures in Harlem apartments with no air conditioning.

How Hot Is Harlem?

This summer, WNYC and its partners are measuring heat and humidity in un-air-conditioned apartments in Upper Manhattan. It's not about the weather. It's about public health.

The Brooklyn Voter Purge: By Age, Registration and Sanders Districts

WNYC obtained the list of purged voters in Brooklyn, and found that Hispanics were disproportionally represented. Here's what else we found.

When mapped by election district, an analysis by member station WNYC shows that Hispanic voters were disproportionately purged from the rolls when compared with all other groups.

WNYC reporters explain their investigation into the recent Brooklyn voter roll purge, which shows that Hispanic voters in District 7 were hit hardest.

WNYC analyzed 120,000 names dropped from the voter rolls before April's presidential primary. We found that Hispanic voters were removed at a higher rate than all other groups.

While You Were Away, Officials Dumped Data

Several organizations offer online tools to total up your carbon emissions. But they don't all give the same answers.

An Uneven Recovery from Sandy

In some New York City neighborhoods, more than half of eligible home construction projects are underway. In others, it's as few as 10 percent.

Most of them are drug offenders, but very few will be coming to New York. Still, critics of the move are raising concerns. WNYC and the Marshall Project put the release in perspective.

New York state has one of the most restrictive laws in the nation governing public access to police disciplinary records. Our 50-state survey shows it doesn’t have to be that way.

Where One Neighborhood Ends and Another Begins

DNAInfo found that its readers disagreed about their neighborhoods' boundaries. WNYC's John Keefe talks about why it matters where one neighborhood ends and another one begins.