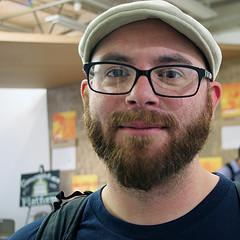 Alan Palazzolo is an open-source engineer focused on making journalism more visual, interactive, and data-driven through technology.  He has spent the last few years working on the data team at MinnPost creating interactive pieces and building reusable, open-source tools and projects. Prior to MinnPost, Alan was an inaugural Code for America fellow and an early participant in the growing field of civic technology.

Before journalism and civic technology, Alan focused on non-profit work with the open-source content platform, Drupal. He is a leader in his fields and has given presentations around the world on subjects from visualization to coding standards to hardware. He believes that community is a major factor in creating successful technology. To that end, Alan has founded and supported a number of online and local, in-person communities on civic tech, open source, hardware recycling, and data visualization.

Alan Palazzolo appears in the following:

Where Members of Congress Stood on the Republican Health Care Bill

NPR, WNYC and dozens of other member stations tracked where lawmakers around the country stood on the controversial bill.

Check if your members of Congress are having town hall meetings during this legislative recess (February 18-26).

Where They Stand: Congress and Trump's Executive Order on Refugees and Immigrants

NPR, WNYC and dozens of other member stations are tracking how lawmakers around the country are responding to President Trump's executive order on refugees. Here's what we found.

Hear the Heat: Our Song Demonstrates What it Felt Like Inside Harlem Homes This Summer

Every 15 minutes, WNYC's recorded the heat index inside about 30 homes in Harlem. And we turned each temperature into a musical note to play what the heat in Harlem sounds like.

Without AC, Public Housing Residents Swelter Through the Summer

Almost 90 percent of New Yorkers have air conditioning in their homes, but less than half of public housing apartments do. And those units don't cool down, even overnight.

An Uneven Recovery from Sandy

In some New York City neighborhoods, more than half of eligible home construction projects are underway. In others, it's as few as 10 percent.

No Exit: What Closed Subway Entrances Have to Do with Delays and Crowding

No Place to Park: Citi Bike 'Deserts' and the Race for the Last Dock

Finding a Citi Bike dock in the morning, or finding a free bike in the evening, is proving increasingly difficult in several Manhattan neighborhoods.

When Pope Francis comes to town this week, getting around above ground will be tricky. Here's a map of the street closures scheduled for the papal visit and the U.N. General Assembly.

When Inspectors Look for Illegal Hotels

A freedom of information request resulted in 2,684 records for illegal hotel inspections in New York City, and some of what turned up is pretty weird. Here's what we've learned.

How Big Is Your Piece of the Park?

WNYC's Data News Team looked at how much park space New Yorkers are sharing, and found that it varies quite a bit depending on where you live.

Our Digital Maps Aren't as Advanced as We Think

One day our maps will change and update in real time thanks to an open-source mapping tool.