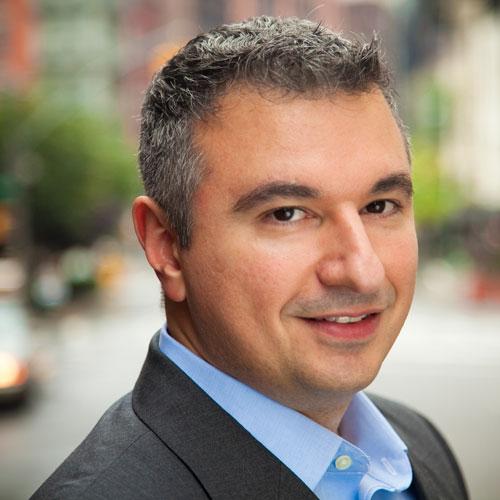 Before you ask... it's Greek. And, so is Johnson (via translation). It's a long story... Soterios Johnson seemed strangely drawn to the news, even as a young child.

As a kid he would lull himself to sleep listening to WCBS NewsRadio 88. "As a kid, I always wanted to be in the know... and to spread the word," he says. In high school, Soterios worked at a small FM station in his hometown in New Jersey, followed by a four-year stint as an undergraduate at Columbia on WKCR, New York. He was an Associate Producer at Newsweek On Air and worked in the field of science journalism for several years. He earned his master's degree at Columbia's Graduate School of Journalism.

Soterios Johnson appears in the following:

Remembering Richard Hake, With Colleagues Past and Present

Soterios Johnson will host his final Morning Edition broadcast tomorrow. Here, he takes calls from listeners and shares a rare tape of his 9-year-old self on the mic.

The Imperfect Science of Dealing with Airport Emergencies

As law enforcement reflects on what caused panic over the false reports of an active shooter at John F. Kennedy Airport last Sunday, a security expert addresses the confusion.

Groups which purport to be foreclosure-prevention or loan-modification firms are actually bilking customers out of tens of thousands of dollars.

The Complicated Legacy Bratton Leaves Behind

The most visible cop in America is turning in his badge at a time of unprecedented turmoil between police and communities of color.

Your Rent Might Not be Legal: Help Us Find Out

ProPublica
Your landlord might be charging you too much, and WNYC wants your help figuring that out.

How Hot Is Harlem?

This summer, WNYC and its partners are measuring heat and humidity in un-air-conditioned apartments in Upper Manhattan. It's not about the weather. It's about public health.

An in-depth look at the moment that sparked the modern gay rights movement.

Tuesday's Congressional Elections Could Affect Balance in the House

Voters in New York will have a chance Tuesday to help decide which party controls the House of Representatives after November’s elections.

The Rockaway Peninsula Isn't as Old as You Think

The author of "Mannahatta" took a good look at historical maps and discovered a surprise.

From 'The Poor Man's Harvard' to 'Brokelyn College'

As Michelle Obama gives the commencement address at City College in Manhattan, the City University of New York is struggling with overcrowded classes and aging facilities.

A new exhibit at the Guggenheim explores the life's work of Laszlo Moholy-Nagy, an artist who defied every boundary.

The Baryshnikov Arts Center presents early works by Merce Cunningham, including a dance that hasn't been seen or performed in more than 50 years.

With Cruz Out, Two New Yorkers March Towards General Election

Why Did Port Authority Scale Back Its Truck Emissions Program?

A plan to phase out aging, smog-generating trucks that jam Newark's Ironbound district replaced just over 400 trucks out of the thousands that travel to Port Newark every month.

Review: Sol LeWitt Collected the Art of Everyone But Sol LeWitt

Some of the best art collections are put together by artists who swap work with each other. A new exhibit at the Drawing Center presents the works LeWitt gathered over time.

The legendary author and activist Jane Jacobs said during a 1962 WNYC broadcast that urban planning shouldn't start with 'What's nasty here?' but rather, 'What's missing here?'

Review: A Waitress, a Serial Killer and Eternal Life Come to Broadway

Musicals based on 'Waitress,' 'American Psycho,' and 'Tuck Everlasting' are now on Broadway. Theater critics from WNYC and the Daily News review the latest adaptations.

For Victims of Child Sex Abuse in New York, Justice Can Be Hard to Find

Advocates for victims of child sex abuse continue to push for changes to New York state laws severely limiting the amount of time a victim has to file charges.