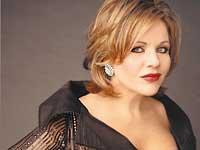 Renée Fleming's vocal artistry is acclaimed worldwide as the "gold standard of soprano sound." The two-time Grammy Award winner's sensuous voice, interpretive skills and stylistic versatility are sought after on stage and in recordings.

A champion of new music as well as the standard repertoire, the American soprano performs throughout the world's most distinguished venues with today's foremost orchestras and conductors. Recognized as a risk-taker in her field, Ms. Fleming has created many roles for the operatic stage and has premiered numerous songs written for her, earning her the respect of her colleagues and praise from the press as one of the great artists of our day.

Renée Fleming's 2004-2005 season is marked by a notable milestone, the November release of her first book, "The Inner Voice." Also this fall, Decca releases her latest recording, a CD of Handel arias. Highlights of her 2004 summer season included her first-ever production of Capricciowith the Paris Opera at the Palais Garnier and appearances at music festivals including Tanglewood, the Hollywood Bowl, Ravinia and Lucerne. Engagements of special note this season include her role debut of Handel's Rodelinda in the Metropolitan Opera's company premiere of this work (December 2004/January 2005); and three performances at Carnegie Hall - at the 114 th Opening Night Gala with The Philadelphia Orchestra and Christoph Eschenbach on October 6 (which will be taped for a nationwide PBS telecast), in solo recital on February 21, 2005, and in duo-recital at Zankel Hall at Carnegie on May 15, 2005 with jazz pianist Brad Mehldau (featuring the world premiere of Mehldau's new work written especially for Ms. Fleming and commissioned by Carnegie). Ms. Fleming performs at numerous galas throughout North America, including the opening night galas of the San Francisco Opera, The Philadelphia Orchestra and the symphony orchestras of Nova Scotia, Virginia, Charlotte and Toronto, as well as at the 50 th anniversary galas for both the Lyric Opera of Chicago (October) and the Houston Grand Opera (April). In early 2005, Ms. Fleming commences a three month, 12-city recital tour that includes January performances at Santa Barbara's Arlington Theatre, Los Angeles' Dorothy Chandler Pavilion, Seattle's Benaroya Hall, Vancouver's Orpheum Theatre, Berkeley's Zellerbach Hall and the Mondavi Center in Davis, California; at Washington, DC's Kennedy Center, Boston's Symphony Hall, New York's Carnegie Hall and St. Paul's Ordway Music Theatre in February; and in April at Fort Worth's Bass Performance Hall and Austin's University of Texas Performing Arts Center. Internationally, Ms. Fleming can be heard in performances in Spain with the Orquesta Teatro Real at Madrid's Teatro Real and Barcelona's Palau de la Musica and with the Gulbenkian Foundation Orchestra at Lisbon's Coliseu dos Recreios in October, and in April with the Berlin Philharmonic and Claudio Abbado. Summer 2005 engagements include a performance with the London Symphony Orchestra at the Barbican for André Previn's 75 th Birthday Gala, a concert version of Thais with Thomas Hampson and the Vienna Radio Symphony Orchestra at Vienna's Konzerthaus, and performances of Otello with the Royal Opera at Covent Garden.

A celebrated artist in the recording arena with numerous award-winning discs to her credit, including two Grammys and eight Grammy nominations, Ms. Fleming has been an exclusive recording artist with Decca since 1995. On May 10, 2005 Decca releases " Haunted Heart "; a personal journey through popular songs Ms. Fleming loves, with jazz pianist Fred Hersch and guitarist Bill Frisell. Recent releases include a collection of arias entitled Renée Fleming: Handel (fall 2004), along with  lude "Renée Fleming By Request," a collection of selected works from her recording catalog plus a few new additions, and the Grammy Award winning " Bel Canto, " a collection of works by Bellini, Donizetti and Rossini, which also received the 2003 Edison Vocal Soloist Award and a 2003 Echo award. Additionally, Ms. Fleming can be heard in three tracks on the Warner Bros. Records original 2003 movie soundtrack to " The Lord of the Rings: The Return of the King ."

An avid reader since childhood, Ms. Fleming is an advocate for Literacy. This fall 2004, the 125 year-old American Library Association (ALA), the oldest, largest, and most influential non-profit library association in the world, features Ms. Fleming in their 2004-2005 READ poster campaign, and this spring 2005 is featured in the nationwide Get Caught Reading campaign, supported by the Association of American Publishers and the Magazine Publishers of America. In November, Ms. Fleming is honored by The New York Public Library as a "Library Lion," an annual award given to individuals in recognition of their contributions through their work. On November 8, 2004, Ms. Fleming's first book, "The Inner Voice," published by Viking Penguin, makes its debut; an intimate account of her career and the creative process, Ms. Fleming shares personal experiences learned throughout the course of her career. In May 2005, Virgin Books publishes " The Inner Voice " in the United Kingdom.

Ms. Fleming's achievements within the classical music industry have been recognized with many honors, the most recent being awarded the 2004 Classical Brits Award for Outstanding Contribution to Music . In 2003, she was bestowed with Honorary Membership by the Royal Academy of Music; she received the 2003 Female Artist of the Year from the Classical Brits Awards, and an honorary doctorate from The Juilliard School (where she was also the commencement speaker). Among earlier awards are the Commandeur de l'Ordre des Arts et des Lettres from the Republic of France (summer 2002); the 2000 Gift of Music Award from the Orchestra of St. Luke's, given to individuals who have made a significant contribution to the world of classical music; the 1997 Musical America Vocalist of the Year, and in 1996, the first Solti Prize of l'Académie du Disque Lyrique for her outstanding recording artistry.

Outside of the classical music world, Ms. Fleming's excellence has been acknowledged as well, from appearing in advertising campaigns to serving as an inspiration for award-winning novelists. In May 2004, at Pacifica Flora, Japan's international horticultural exhibition, the "Renée Fleming" iris was unveiled, and can also be seen at the Friendship Garden in Rochester, New York. She has represented Rolex's timepieces since 2001. People Magazine named her one of the "25 Most Intriguing People" of 2000, and in 1999, master chef Daniel Boulud paid homage to her with the creation of "La Diva Renée," placing her in a legendary pantheon. The novelist Ann Patchett referred to her as the inspiration for the main character in her best-selling book , Bel Canto (2002) . Couturier Gianfranco Ferre has designed Ms. Fleming's stage gowns since 1998, and Issey Miyake and Oscar de la Renta have created gowns for her as well.

Renée Fleming studied at The Juilliard School and holds degrees from the State University of New York at Potsdam and the Eastman School of Music. Early recognition in Ms. Fleming's career includes the 1988 Metropolitan Opera National Auditions, the Richard Tucker Award, the George London Prize, the Grand Prix at the International Singing Competition in Belgium, and a Fulbright Scholarship to Germany.

Renée Fleming appears in the following:

Leontyne Price’s A Program of Song

Mississippi in the 1910s produced some of our country’s greatest blues artists. It also produced one of our greatest operatic singers, soprano Leontyne Price.

Soprano Renée Fleming discusses “Vienna: Windows to Modernity,” the final concert in her Perspecitives series at Carnegie Hall on May 4. The concert is a tribute to the music of the turn of the 20th century, an era in which Vienna was a hotbed of creativity and music and art. Renée Fleming is joined by pianist Jeremy Denk, the Emerson String Quartet, violinist Paul Neubauer, and cellist Colin Carr.

WQXR will be rebroadcasting her January Carnegie recital with Susan Graham on Friday, May 4, at 8 pm.

Soprano Renée Fleming was on the Lopate Show to talk about her new album of French songs, "Poemes." She also admitted her love of sugar.

Soprano Renée Fleming  has a new album titled Dark Hope, on which she covers indie rock acts like Muse, Arcade Fire, Duffy and the Mars Volta.

House Bands Have It Out

Now in their second season on Late Night with Jimmy Fallon, The Roots are poised to become the biggest band on late night TV. But they've got the old guard to contend with: Paul Shaffer of the Letterman show is still going strong after three decades. On today's Soundcheck Smackdown: the battle of the late night bands. Plus, opera soprano Renée Fleming talks about her controversial new indie rock album.

Soprano Renée Fleming remains one of opera's best-known stars, as evidenced by her headlining appearance at the Metropolitan Opera's opening night gala, and her latest CD, Strauss' "Four Last Songs," to be released this week. But she’s increasingly expanding her profile beyond opera – launching a signature perfume and performing ...

Met opera superstar Renée Fleming shares with Gilbert Kaplan the music she loves to sing (Bellini, Massenet, Strauss) or just listen to (Satie, Crumb) and reveals why she tries to avoid "diva behavior"; that forgetting some of her lines "happens to me all the time"; how the opera stage enables her to become uninhibited; how she copes if the audience boos; and even offers a theory on why the legendary Maria Callas lost her voice.

Met opera superstar Renée Fleming, who will perform at the opening of Carnegie Hall on Wednesday, October 6th, talks about music she loves to sing (Bellini, Massenet, Strauss) or just listen to (Satie, Crumb) and reveals why she tries to avoid "diva behavior"; that forgetting some of her lines "happens to me all the time"; how the opera stage enables her to become uninhibited; how she copes if the audience boos; and even offers a theory on why the legendary Maria Callas lost her voice.