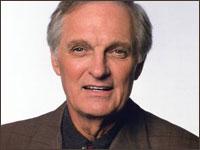 Alan Alda has earned international recognition as an actor, writer and director in films.

These include his portrayals in "Crimes and Misdemeanors," "Everyone Says I Love You," "Flirting With Disaster," "Manhattan Murder Mystery," "And The Band Played On," "Same Time, Next Year" and "California Suite," as well as "The Seduction of Joe Tynan," which he wrote, and "The Four Seasons," "Sweet Liberty," "A New Life," and "Betsy's Wedding," which he wrote and directed. This year, he appears in Martin Scorsese's "The Aviator," for which he received a nomination for an Academy Award and was also nominated for a British Academy Award.

On the Broadway stage, he recently appeared as the physicist Richard Feynman in "QED". He starred in the first American production of the international hit play "ART." He was nominated for the Tony Award for his performances in Neil Simon's "Jake's Women" and the musical "The Apple Tree." This spring, he will appear on Broadway in a revival of David Mamet's "Glengarry Glen Ross."

He also appeared in "The Owl and the Pussycat," "Purlie Victorious" and "Fair Game for Lovers" for which he received a Theatre World Award.

He is the host of the award winning series "Scientific American Frontiers" on PBS. On television this season, he is appearing on "The West Wing."

He played Hawkeye Pierce on the classic television series "M*A*S*H," and also wrote and directed many of the episodes. In eleven years on "M*A*S*H," Alda won the Emmy Award five times and is the only person to be honored by the TV Academy as top performer, writer and director. In all, he has been nominated for 30 Emmys including a nomination in 1999 for his performance on ER. In 1994 he was inducted into the Television Hall of Fame. In addition, he has won the Director's Guild Award three times, has received six Golden Globes from the Hollywood Foreign Press Association, and seven People's Choice Awards, and has been nominated for two Writer's Guild Awards.

For his role in Woody Allen's "Crimes and Misdemeanors" he won the D.W. Griffith Award, the NY Film Critics Award, and was nominated for a British Academy Award as Best Supporting Actor.

Alan Alda was born in New York City, the son of the distinguished actor, Robert Alda. His introduction to the theater came at the age of 16 in summer stock at Barnesville, Pennsylvania.

During his junior year at Fordham University, he studied in Europe where he performed on the stage in Rome and on television in Amsterdam with his father.

After college, he acted at the Cleveland Playhouse on a Ford Foundation grant. On his return to New York, he was seen on Broadway, off-Broadway and on television. He later acquired improvisational training with "Second City" in New York and "Compass" at Hyannisport. That background in political and social satire led to his work as a regular on television's "That Was the Week That Was."

Alda's first motion picture part came in "Gone Are the Days," in which he recreated his stage role from "Purlie Victorious." He later appeared in "The Moonshine War," "Jenny," "The Mephisto Waltz," and "Paper Lion." Television performances include Truman Capote's "The Glass House" and "Kill Me If You Can" for which he received an Emmy nomination for his portrayal of Caryl Chessman.

For twenty years he was a member of the Board of the Museum of Television & Radio, and for ten years, from 1989 to 1999, he was a Trustee of the Rockefeller Foundation.

His wife, Arlene, is the author of eleven children's books. An award winning professional photographer, her work has appeared in a number of magazines and books. They have three daughters and seven grandchildren.

Alan Alda appears in the following:

A Century of Relativity

Alan Alda and Brian Greene discuss the centenary of Einstein’s General Theory of Relativity, and other highlights of this year's World Science Festival.

Arlene and Alan Alda on Growing Up In the Bronx

Arlene Alda's new book, Just Kids from the Bronx: Telling It the Way It Was, is a portrait of the Bronx from the early twentieth century until today.

In "Dear Albert" - a staged reading of letters written by Albert Einstein - you get an impression of a man grappling with big ideas...and a complicated love-life. Alan Alda, actor and...

Alan Alda and Brian Greene on Science as Storytelling

The actor and the physicist weigh in on ways to humanize scientific insights and groundbreaking discoveries, as they participate in the 2014 World Science Festival in New York.

Alan Alda, discusses the PBS program, “Brains on Trial,” about how developments in neuroscience may dramatically affect criminal trials. He’s joined by psychologist and neuroscientist Dr. Bea Luna. “Brains on Trial” airs on PBS  September 11 and 18.

Yesterday Alan Alda, the Emmy winning actor and writer, as well as visiting professor and advisory board member at the Alan Alda Center for Communicating Science at Stony Brook Univer...

This live interview with Alan Alda originally aired on April 18, 2013. An edited version was aired on July 5, 2013, as part of a special Brian Lehrer Show.

Alan Alda, actor and co-founder of the Center for Communicating Science at Stony Brook University, discusses his family's experience with dyslexia and what others can learn from it.

Alan Alda and Dr. Harold Varmus discuss the 2012 World Science Festival, May 30 – June 3. The Foundation’s mission is to cultivate a general public informed by science, inspired by its wonder, convinced of its value, and prepared to engage with its implications for the future.

Alan Alda talks about what he likes about being a guest on the Leonard Lopate Show. Find out more about celebrating Leonard's 25th here.

What Makes Us Human

Alan Alda, talks about hosting—and participating in experiments for—the three-part PBS series "The Human Spark." It looks into the question "what makes us human," from anthropological, social, and scientific viewpoints.

Things I Overheard While Talking to Myself

When actor and author Alan Alda recovered from a nearly fatal intestinal obstruction, he decided to live as if he’d been given a second life. In Things I Overheard While Talking to Myself, he shares the questions and answers he grappled with as he tried to make his new life ...

On today’s show, former Secretary of Labor Robert B. Reich explains why he thinks the triumph of global capitalism has made democracy less effective. Then, actor Alan Alda shares how he strived to create a meaningful life after a nearly fatal intestinal obstruction. Also, we look at an internationally renowned ...

Award-winning actor Alan Alda reveals his favorite composers include Chopin, Mozart and Gershwin, whose Rhapsody in Blue he first heard at age seven (at the time his father was playing George Gershwin in that film).