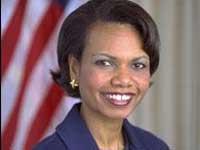 In June 1999, she completed a six year tenure as Stanford University 's Provost, during which she was the institution's chief budget and academic officer. As Provost she was responsible for a $1.5 billion annual budget and the academic program involving 1,400 faculty members and 14,000 students.

As professor of political science, Dr. Rice has been on the Stanford faculty since 1981 and has won two of the highest teaching honors -- the 1984 Walter J. Gores Award for Excellence in Teaching and the 1993 School of Humanities and Sciences Dean's Award for Distinguished Teaching.

At Stanford, she has been a member of the Center for International Security and Arms Control, a Senior Fellow of the Institute for International Studies, and a Fellow (by courtesy) of the Hoover Institution. Her books include Germany Unified and Europe Transformed (1995) with Philip Zelikow, The Gorbachev Era (1986) with Alexander Dallin, and Uncertain Allegiance: The Soviet Union and the Czechoslovak Army (1984). She also has written numerous articles on Soviet and East European foreign and defense policy, and has addressed audiences in settings ranging from the U.S. Ambassador's Residence in Moscow to the Commonwealth Club to the 1992 and 2000 Republican National Conventions.

From 1989 through March 1991, the period of German reunification and the final days of the Soviet Union, she served in the Bush Administration as Director, and then Senior Director, of Soviet and East European Affairs in the National Security Council, and a Special Assistant to the President for National Security Affairs. In 1986, while an international affairs fellow of the Council on Foreign Relations, she served as Special Assistant to the Director of the Joint Chiefs of Staff. In 1997, she served on the Federal Advisory Committee on Gender -- Integrated Training in the Military.

She was a member of the boards of directors for the Chevron Corporation, the Charles Schwab Corporation, the William and Flora Hewlett Foundation, the University of Notre Dame, the International Advisory Council of J.P. Morgan and the San Francisco Symphony Board of Governors. She was a Founding Board member of the Center for a New Generation, an educational support fund for schools in East Palo Alto and East Menlo Park, California and was Vice President of the Boys and Girls Club of the Peninsula . In addition, her past board service has encompassed such organizations as Transamerica Corporation, Hewlett Packard, the Carnegie Corporation, Carnegie Endowment for International Peace, The Rand Corporation, the National Council for Soviet and East European Studies, the Mid-Peninsula Urban Coalition and KQED, public broadcasting for San Francisco.

Condoleezza Rice appears in the following:

"Mad About Music" kicks off the New Year by revisiting Secretary of State designate Condoleezza Rice's first appearance on the show. She talks about why Mozart, Beethoven and Brahms are her favorite composers; why she is drawn to minor keys but not romantic music; and how President Bush and she have different musical tastes.