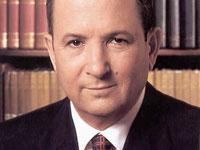 A leader of his country in both war and peace, Ehud Barak served until recently as Israel's 10th Prime Minister.

During his tenure, Prime Minister Barak lead Israel out of prolonged recession into an economic boom, with 5.9% annual growth, record foreign investments, near zero inflation, a halved deficit and significantly decreased external debt.

The core of the Barak government's effort was devoted to the peace process: in May 2000 Prime Minister Barak ordered the withdrawal of the Israeli Defense Forces from South Lebanon, ending 18 tragic and bloody years of Israel's presence there. He led far-reaching efforts to negotiate peace agreements, first with Syria and later with the Palestinian authority, with the active participation of President Bill Clinton and his administration. Regrettably, these negotiations did not result in the breakthroughs necessary to conclude final agreements.

Before being elected Prime Minister, Barak completed an illustrious 36-year career in the Israeli Defense Forces as the most decorated soldier in its history.

Ehud Barak was a key architect of the June 1976 Entebbe Operation for the rescue of passengers on the Air France aircraft hijacked by terrorists and forced to land at the Entebbe Airport in Uganda.

Additionally, he served as Chief of the General Staff of the IDF where he was involved in the negotiation and implementation of the 1994 Peace Treaty with Jordan – an especially meaningful event for Barak in light of his warm relationship with King Hussein.

Mr. Barak additionally served his country as Minister of the Interior, Minister of Foreign Affairs and Defense Minister.

Mr. Barak received his B.S. in Mathematics and Physics from the Hebrew University in Jerusalem and his M.SC in Economic Engineering Systems at Stanford University in California.

Ehud Barak appears in the following:

Ehud Barak talks about his life, from his younger days in the Israeli military to his political accomplishments and challenges as prime minister of Israel.