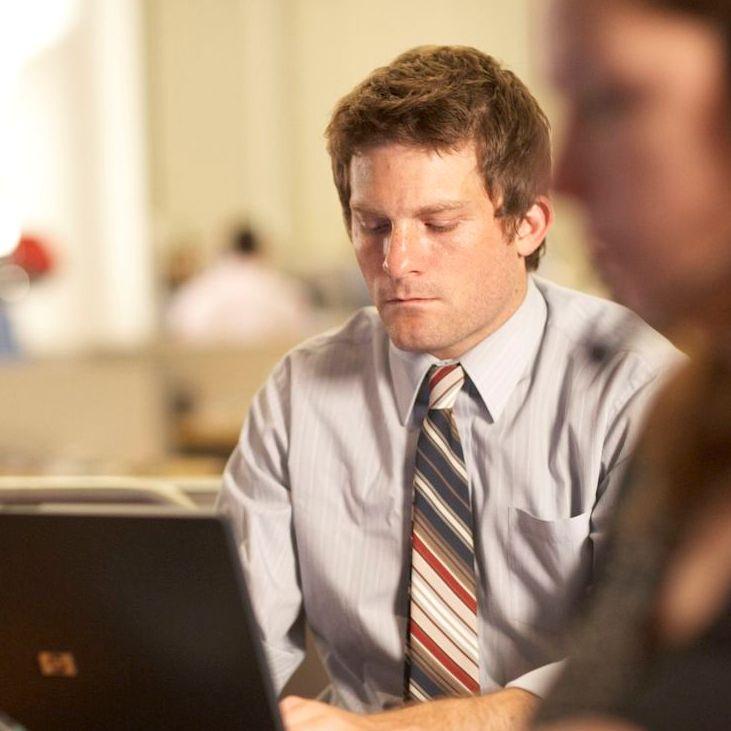 Jody Avirgan started two days before The Brian Lehrer Show won a Peabody, and he is taking full credit. He comes to WNYC from WFUV, where he produced "Cityscape" and before that KQED Radio in San Francisco. He's a founder of Longshot Radio, and has produced pieces that have aired here and there and everywhere. Every other month in New York City he hosts the conversation series Ask Roulette, a live audience version of the Brian Lehrer Show's "radio roulette" segments.

Jody went to high school in Washington, DC and college in Middletown, CT, which few people know is called Middletown because it's the geographical center of the world.

Jody Avirgan appears in the following:

A look at the allegations of sexual harassment and assault against the founder of Bikram yoga, Bikram Choudhury.

From Inspiring to Insidious

Jody Avirgan, host and producer for the FiveThirtyEight podcast "What's The Point," gives awards to the most interesting stories about data this year, silly and serious.

Charles Mingus Toilet Trained His Cat. We Put His Method to the Test.

Crazy or brilliant? Jazz legend Charles Mingus came up with a method for toilet training his cat, so we tried it out on a kitty named Dizzy.

How Much Did You Pay For Your Christmas Tree?

It's the most wonderful time of the year for Christmas tree farmers. How much do you spend on a Christmas tree? Fill out our survey here.

The star of Oz and The Wire reads Charles Mingus's secret masterpiece: a guide to toilet training your cat.
Read More

Charles Mingus Toilet Trained His Cat. We Put His Method to the Test.

Crazy or brilliant? Jazz legend Charles Mingus came up with a method for toilet training his cat, so we tried it out on a kitty named Dizzy.

Check out photos and the full audio of the show's 25th anniversary celebration at the New York Society for Ethical Culture, including the a history quiz, Mo Rocca, and more!
Read More

WNYC is taking the tips and tricks of campaign operatives and using them to convince people to vote. Here's a video of what happened when we went door-knocking in the Bronx.
Read More

From Data to Door-Knocking: How Our Political Campaign is Faring

We've crunched the data, learned from the pros, and made some robocalls. Now we're knocking on doors to tell people to just vote already.

Knock the right way. Don't be too funny. Help voters visualize election day. Here's what we learned about getting out the vote -- and how we're putting it to work.
Read More

WNYC talked to seasoned campaign operatives to learn the tips and tricks of how to get people to vote. Now, we're launching our own campaign.

Cyclists, What Do You Do At Red Lights?

The law says stop and wait, but many local bikers adopt their own rules. So, do you stop/wait; stop/look/go; or blow through red lights?
Read More

President Obama addressed the country about how the U.S. would lead a coalition to "degrade, and ultimately destroy" ISIS in Syria and Iraq. Read the transcript, watch the video.
Read More

What Happened Over the Last 25 Years? Help Us Brainstorm

This is the 25th year of the Brian Lehrer Show, and all this fall we'll be marking it with a year-by-year look at some of the defining stories from 1989 through 2014. Right now, we're at the brainstorming stage, also known as the "remember that thing that happened that year?" stage. And we need your help!

In the spreadsheet below, the producers of the show are starting to fill in items from each year (thanks Wikipedia!), but we've opened the spreadsheet for you to help remember what really mattered. So join in when you have a few minutes, starting with any year. A few guidelines:

You Should Root for Costa Rica Now That the U.S. Is Out of the World Cup

There's plenty of room on the bandwagon. You might even be able to get shotgun.

We break down the strengths and weaknesses of the players and the teams headed to the quarterfinals.

A Letter from Mississippi 1964

In August of 1964 my mother, Martha Honey, then a Freshman at Oberlin College in Ohio, traveled to Mississippi as a member of SNCC for the "Freedom Summer" campaign to register Black voters. She attended the funeral of James Chaney, one of three civil rights workers - Cheney was a black Southerner; Andrew Goodman and Michael Schwerner were white Northerners - murded by the Klu Klux Klan near Philadelphia, Mississippi. That evening she wrote a letter to a classmate. It appears in Howard Zinn's Voices of a People's History of the United States. Here is an excerpt:

Watch: How to Curse Like a World Cup Fan

We talk to World Cup obsessives from Japan, Cameroon, Brazil, Mexico, Croatia and Greece about how they cheer (and drink, and curse) their team.

What better guide to the music of Duke Ellington than Wynton Marsalis? And here he is doing it live, improvised on WNYC. It's like a master class in trumpet, all in two minutes.