John Hockenberry appears in the following:

More than 3.5 million Americans are living in "commuter marriages." Hundreds of you got in touch to tell us how you're hanging in there.

Battle of the Zzzzs: The Home Stretch

As part of WNYC's Clock Your Sleep project, WNYC hosts have been leading teams competing to get more sleep by trying different strategies. Hear how it's going and who's winning in the...

Clock Your Sleep: Battle of the Zzzzs

Audio Essay: A Poignant Warning from The Past

Writer Stefan Zweig tried to warn the world about the future, but he gave up and committed suicide in 1942 as the world was engulfed in the flames of World War II. As tensions continu...

Clock Your Sleep: Findings and Teams

As a group, the over 4,600 Clock Your Sleep participants got more sleep in the fourth week than in the first week fo the project. WNYC's data news team senior editor John Keefe discus...

A year ago today, no one knew what was about to happen, and for each runner, they knew it would be a momentous day. It was a momentous day for the whole city of Boston, the nation and the world of course.

In this very special Movie Date bonus podcast, listeners have a chance to re-listen to Rafer and Kristen's Oscar predictions from earlier in this year. Also, all three parts from The ...
Read More

Sir Ian McKellen stopped by The Greene Space on Tuesday, February 18 for an intimate conversation on his life and career with The Takeaway's John Hockenberry. 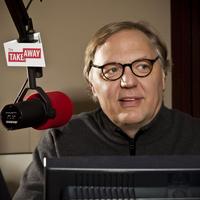 Join The Takeaway host John Hockenberry for an evening of live music from One Ring Zero, drinks and conversation with some of the brightest lights in the mind-bending, down-the-rabbit hole world of codebreaking. Watch a live video webcast at 7pm ET.

As part of our series "Young Nation Under God?," The Takeaway will host a live online chat today from 2-3 PM Eastern. The chat will focus on the changing role religion plays in Americ...

Iranian President Hassan Rouhani appeared at the Asia Society in Manhattan last night, and Takeaway Host John Hockenberry was on-site to witness Rouhani's speech and even a surprise a...

Live Chat: Should The U.S. Intervene in Syria?

Today at 2:00 PM Eastern time, The Takeaway's John Hockenberry will host a live chat dedicated to the unfolding crisis in the Middle East as America focuses on possible next steps for...

The Takeaway Answers Listener Questions on U.S Intervention in Syria

The Senate and the House directed their concerns and inquiries to Secretary of State John Kerry, Secretary of Defense Chuck Hagel, and Gen. Martin Dempsey, the chairman of the Joint C...

The NYPD uses “terrorism enterprise investigations” that are carried out for multiple years and allow the police to plant informants in mosques. Linda Sarsour is executive director of...

Arianna Huffington Speaks Out on Anonymous Comments & Freedom of Expression

Beginning next month, the online news site will require users to comment on stories under their real names. Arianna Huffington, President and Editor-in-Chief of the Huffington Post Me...

Eydie Gorme died yesterday at the age of 84 surrounded by her family in Las Vegas, the city where she and her husband Steve Lawrence performed so often and where they got married in 1...

Your Next Vacation: Outer Space?

Takeaway Host John Hockenberry visited the American Physical Society's newest production—but it's not what you would expect. The Intergalactic Travel Bureau looks like any other trave...

Miguel Ángel Treviño Morales is one of the most violent, most feared, and until recently, the most wanted man in Mexico. He was captured last night by Mexican marines just south of th...

Is there a change in the mood in Egypt? Is the interim government losing ground in its attempt to reassure the population that change is coming? Fighting broke out last night between ...

One of America's longest-running murder mysteries may now be coming to a close as the Boston Strangler case comes one step closer to being solved. Albert DeSalvo had confessed to bein...