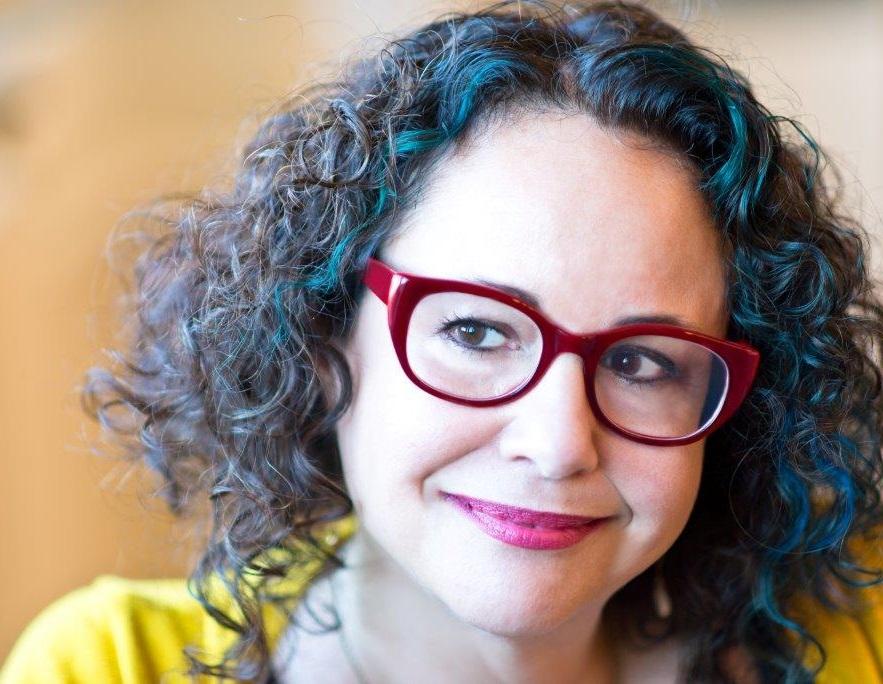 Brooke Gladstone is best known for the…pause…that Bob Garfield inserts before mentioning her name in the credits for On the Media.

She’s the recipient of two Peabody Awards, a National Press Club Award, an Overseas Press Club Award and many others you tend to collect if you hang out in public radio long enough.

Just before coming to On the Media, she did some pilots for WNYC of a call-in show about human relationships with Dan Savage called A More Perfect Union. That was pretty cool.

She also is the author of The Influencing Machine (W.W. Norton), a media manifesto in graphic form, listed among the top books of 2011 by The New Yorker, Publisher’s Weekly, Kirkus Reviews and Library Journal, and among the “10 Masterpieces of Graphic Nonfiction” by The Atlantic.

Gladstone always wanted to be a comic hero and she finally did it. Here she is animated.

At WNYC’s 2012 Christmas party, backed by the fabulous Radio Flyers band, she sang “Bei Mir Bist Du Schoen,” with her sisters Lisa and Stacey, thus fulfilling all her dreams.

A Short History of Trans Representations in Hollywood

The Netflix documentary "Disclosure" walks us through the good, the bad, and the troubling.

Making sense of the science behind legislation targeting trans youth in over 30 states.

Trans Children Have a Long History

How a more complete history of trans lives offers new pathways to the future.

Revisiting the incident after remains of at least one victim were returned just last week.

On the Inside Looking Out

For the incarcerated, basic info about the vaccines is even harder to parse with limited access to news.

How three women changed the course of history and paved the way for women to cover wars.

What to do with words — or silence — from the Oval Office.

Not Your Inmate: The Weight of Language in Criminal Justice Coverage

It's Gonna Be May Day

May Day isn't some kind of Soviet export developed in Moscow's Red Square. It actually started in the U.S.

Are We Alone? The Search for Life Beyond Earth

As we rove Mars, are others roving us?

The actor behind Dash of "The Incredibles" confronts its sequel for the first time.

We examine the fuzzy math and misleading language that can cloud media coverage of vaccines.

How the Bessemer Story Got the Wind Knocked Out of It

Labor-friendly media depicted a movement with momentum. Did they overhype the union drive?

On the Inside Looking Out

For the incarcerated, information about the covid vaccines is even harder to parse with limited access to the media.

Court TV, which produced soapy legal broadcasts in the 90s, is manning the cameras at the Derek Chauvin trial.

Reporting on You: A Look Back at the Fight for Gay Marriage

Covering gay marriage when your own vows are at stake.

Why the View From Nowhere is a Harmful Myth

Moving on from so-called "objectivity."

White editors still have significant control of newsroom leadership positions — and "objectivity" itself.

Newsrooms Need To Support Reporters With Trauma — Not Disqualify Them