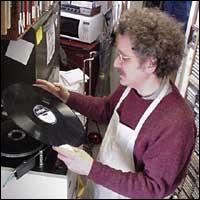 The first rule in archiving audio involves determining playback formats. While almost everyone is familiar with the CD, LP, cassette, and the 8-track, there have been numerous other audio formats since Thomas Edison first reproduced sound on a strip of tin foil in 1877. These include cylinders, discs, wire, film and tape, variously made of a wide variety of substances: wax, shellac, acetate, vinyl and polyester, to name a few.

The archivist must determine the proper playback medium in order to listen to and preserve historic recordings. Discs and cylinders have grooves of varying size; tape formats also have varying speeds, track configurations and tape thickness. Recordings may be damaged by playback if you are using the wrong equipment or equipment that is not properly adjusted: for example, older acetate tape can easily break. 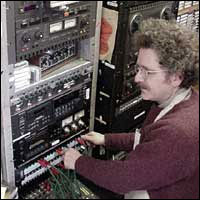 With so much undocumented audio, it takes an experienced hand - or preservation specialist, as they're known in the business - to assess the condition and quality of historic recordings. The specialist has to inspect the tape to determine things like tape curl, splicing, and any mildew collected on discs due to improper storage.

Labeling is a crucial aspect of this process, particularly where playback speed is concerned. Depending on the label and date of manufacture, for instance, many early shellac recordings are not 78's at all but run as slow as 70 rpm (revolutions per minute) or as fast as 80 rpm. And, unless clearly identified by labeling, the amount of taped material can only be determined through playback. Playing determines the proper speed and track configuration.

Once audio formats have been clearly identified, their condition assessed and inventoried, a plan and budget for restoration, cleaning, and transferring to more stable media can be drawn up.

A Clean Sweep: Restoration and Cleaning 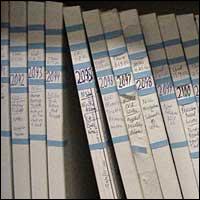 Unlike paper and photographs, audio recordings need contemporary hardware to draw as much of the audio signal as possible from the old medium when transferring it to a more stable format. Restoration of a disc or tape is key to an accurate reproduction of the original material. For example, stiff tape can be made to relax and the grit-laden grooves of vintage shellac recordings can be cleaned to allow the stylus an unimpeded track to follow from start to finish.

Various techniques are used in restoration, which depend on the condition of the original disc or tape. Acetate discs, for example, are notorious for exhibiting a greasy white overcoat that signals a breakdown in the nitrocellulose acetate and requires a cleaning. 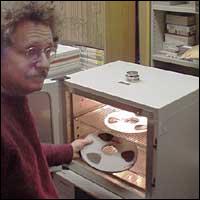 Old tape that has been spliced must be carefully evaluated before transferring. Tape suffering from a breakdown of the binder that holds the oxide particles to the paper, acetate or polyester tape backing may squeal mercilessly as it passes over the metal tape guides and heads of the playback recorder, leaving a sticky residue. This is the ailment known as "sticky shed syndrome." Treating the tape with the careful use of a convection oven has proven successful in allowing for a smooth transfer of audio material to safer media.

Vinyl records require equal care. Distilled water is useful when removing foreign material from vinyl and some transcription discs, but could be disastrous on a plastic-coated paper or cardboard-based disc.

Another aspect of an archivist's job involves transferring recordings between formats. While anyone with some simple computer software can download and burn digital audio files these days, copying the contents of an historic format —and retaining as much of the original signal as possible— is a far more complex process. It involves cleaning, stylus selection, and the proper playback equalization settings. The resulting preservation transfer is then a baseline from which all subsequent copies are made.

The size of a disc groove will vary depending largely on when the disc was made. Some early aluminum and acetate "insta-cuts" discs require a 6.0 mil stylus while some stereo LPs can use a stylus as small as 0.5 mil. The range in between, while difficult to see with the naked eye, represents a world of difference to the ear. 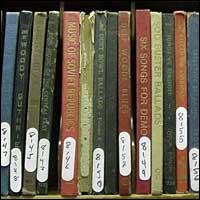 Sometimes an engineer may decide that a singer will sound better if the frequencies on the high end of her voice receive less emphasis while the frequencies on the low end of her voice are given more emphasis. By altering specific frequencies, the engineer is said to be applying equalization. Before the Recording Industry Association of America (RIAA) adopted the RCA Victor standard for disc recording in 1956, studio engineers often equalized or modified the original recording signals to fit within a standard set by the individual record label or broadcast transcription disc cutter. Sometimes these standards vary from year to year even within the same company.

Depending on the condition of the disc and the quality of the recording, it may also have additional surface or undesirable noise. Although there are exceptions, it is generally not acceptable for preservationists to use signal processing equipment to "enhance" or alter the preservation transfer because this type of processing can be very subjective, varying from engineer to engineer and the type of equipment used. Again, the preservation transfer is a baseline from which copies can be made. These copies may incorporate signal processing that will alter and enhance the original recording.

Beyond any necessary cleaning and restoration work, properly calibrated tape recorders are critical. WNYC's equipment is regularly calibrated by a certified broadcast engineer to comply with the National Association of Broadcasters (NAB) standards for recording and playback of magnetic tape. These NAB standards are an accepted standard by the American National Standards Institute (ANSI).

Following recommendations from the Library of Congress, The Association for Recorded Sound Collections (ARSC) and the International Association of Sound and Audiovisual Archives (IASA), WNYC and WQXR are now storing all digitally born audio material as broadcast wave files (BWF) at their original production sampling and bit rates in our digital asset management system or DAM. Known as Silex Media's DAVID system, the DAM is fairly common at European broadcast facilities and several major North American clients. Analog material in the archives is transferred into DAVID at 96 kHz sampling rate and 24 bit resolution using professional analog-to-digital converters and recording software. The storage network and back-up systems for the DAM have multiple redundancies, fail-safe and self-policing mechanisms for detecting and repairing node and/or disk failure within a clustered Isilon storage array. In addition, these digital assets are backed-up to an LTO-4 high density tape carousel storage with copies moved to an off-site data storage vault.