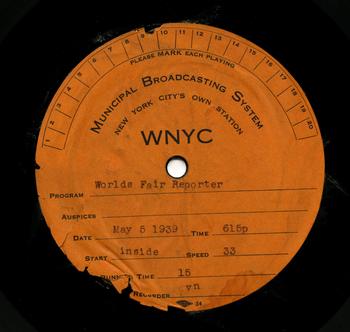 Established in the year 2000, the New York Public Radio Archives are the station's physical link to its rich and storied past. Below you can check out WNYC's digitized radio legacy, selected from thousands of lacquer transcription discs and tapes in the Municipal Archives WNYC collection as well as thousands of recordings on every format (except cylinder and wire) we house on-site. These broadcasts feature arts programming, panel discussions, notable interviews, WWII coverage, and much more. Many WNYC broadcast recordings were digitized with generous support from the National Endowment for the Humanities, the Grammy Foundation, the New York State Department of Education, The National Recording Preservation Foundation, and the Metro New York Library Council. The NYPR Archives especially acknowledges the early and ongoing support and encouragement we received from the late, great, Alexander (Lex) Kaplen and the Kaplen Foundation.

We hasten to add, you can find vintage WQXR program series on this page as well as at: WQXR Archives!