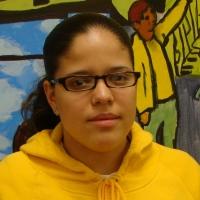 I am Victoria Cruz, I was born in the Bronx, New York. I'm 17-years-old. I am a hard-working person that loves to finish her work on time. My interest is to become the best I can be. I spend my time doing school work and putting stories on the radio. My plans for the future are to become a social worker and help many students express their stress.

I live in the Bronx, New York. It is very loud and crowded, but it is a very good place to live in even though some people make you feel low when they call it the "ghetto," but people can make them think another way.

One interesting thing about me is that I'm determined and confident about who I am. (October 2009)

Recorder: New New
The name of my recorder is New New, from ATL. She's very confident, a very good listener, and a good working companion.

(Note: Each Rookie named his/her equipment as a way to feel more at ease with the technology.)

In November, Radio Rookies took part in the Mozilla Festival -- in London! The festival is all about teaching everyone to be a webmaker. Presenters come to show off their own hard work but are also there to teach young people and educators their skills.  People have the chance to actually use the tools they learn to make things there at Moz Fest.

At 17-years-old, Vikky Cruz struggles to cope with her mother's illness, a rare gentetic disease called neuroacanthytosis, and the ways it's taken over the mother she once knew.

Rookie Vikky Cruz Reports Back on the Youth Radio Conference

At the end of August a group of Radio Rookies attended the first annual Red Hook Initiative Youth Radio Conference at the Brecht Forum in Manhattan. Here, Bronx Rookie Vikky Cruz reports back on the day.

Even though Victoria is too young to vote in the 2008 presidential election, like a lot of young people, the race has sparked a growing curiosity in her about politics.