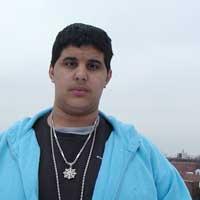 Samr “Rocky” Tayeh was first introduced to journalism when he joined Radio Rookies in 2003 and produced the radio documentary "My Struggle with Obesity," which won an honorable mention at the 2005 Third Coast Audio Festival.  The audience and media response to his personal account of living as a fat teenager put Rocky at the center of the public discussion about the national childhood obesity epidemic.

Rocky has appeared in numerous print articles and television shows, including documentaries on The Food Network and PBS, both airing in 2007.  Since Rocky's first story aired, he has produced three additional radio pieces for WNYC and NPR (on topics other than his weight).  Rocky is 19, a freshman in college, and studying broadcast journalism.  He lives in Brooklyn, New York .

Tuesday, the board of supervisors in Santa Clara County, California, decided to take a step further in the fight against obesity: they banned toy giveaways with kids' meals that don't meet certain nutritional standards. (Overall calorie count and salt content chief among them.)  This is the latest attempt in a series of measures taken by counties, cities and states to combat obesity, and is widely seen as specifically targeting McDonalds' Happy Meals.

Radio Rookies 10 Year Anniversary: Where Are They Now?

Today we hear from Samr “Rocky” Tayeh, who first went on the radio in 2003 to report on his life as an obese teenager. Since then, Rocky had weight loss surgery and dropped 300 pounds. Now he’s trying out some of the things that were impossible for someone so overweight, like learning how to ride a bike.

This week Radio Rookies is celebrating its 10th Anniversary and checking in with some of the past Rookies.

How To Survive Teasing

Rocky didn't hide in a corner and wait for the bullying to stop when he was a kid, he learned how to use his sharp tongue to shut other kids down, but sometimes he takes it too far.

Radio Rookie Rocky Tayeh reports on the City Council's latest effort to improve education in NYC – a hearing held especially for students to testify about the state of their schools.

Rocky has lost a lot of weight due to the lap band surgery. Yet while those numbers make it seem like a quick fix, choosing and living with weight loss surgery can be anything but.

Midwood has a growing Muslim immigrant community. Three Muslim boys from the Midwood workshop, two Pakistani and one Palestinian, reflect on what it's like for them living in America.

My Struggle with Obesity

Rocky's story is about his emotional struggle with obesity. Three times the size of his twin sister, Rocky is the target of many of his siblings' jokes and insults.