Robert George appears in the following:

After Justice Kennedy: A Call-in Special

WNYC's Jami Floyd hosts a live call-in special about the retirement of Supreme Court Justice Anthony Kennedy, and what to expect from his replacement. 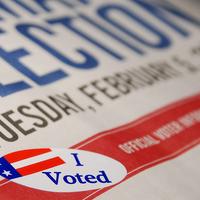 The Battle For the White House: A Preview of Election 2012

Farai Chideya, WNYC political contributor, and guests from across the ideological spectrum to discussed the themes and tactics that will shape the Presidential election one year from now. Will the election be a referendum on jobs, Wall Street, moral leadership, and taxes?

Robert George, columnist for the New York Post and blogger at Ragged Thots talks about the year in scandals.

Robert George, columnist for New York Post and blogger at Ragged Thots talks about the year in scandals.

What surprises are you predicting ...

...But Was It Good For Democracy? Parsing Super Duper Tuesday

But Was It Good For Democracy?

Super Tuesday saw heavy turnout at the polls, but revealed a patchwork of primaries, caucuses, and confusing delegate counts. Robert George, Benjamin Barber, and David Epstein join us to discuss whether our primary system is damaging our Democracy. Plus: A new series celebrating black history month, and Fred Kaplan discusses ...

Are You The One? After Iowa