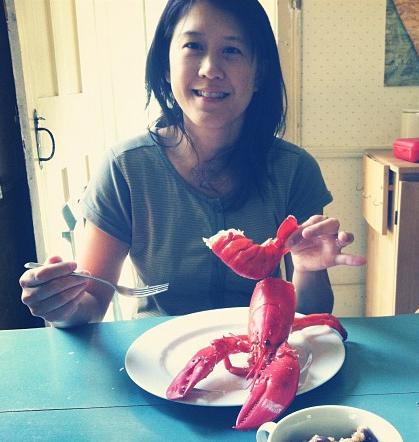 Jennifer Hsu is a senior producer at WNYC. She is the creator of the Know Your Neighbor video series, which won a New York Press Club Award.

She's covered renovations at the United Nations, an elite unit of the NYPD, and a summer camp for smartphone detox. Her work on the series "On the Brink," about falling out of the middle class into poverty, won a Front Page Award. In 2010, she was chosen as a USC Annenberg/Getty Arts Journalism Fellow. Before coming to WNYC, she was a senior multimedia editor at Rolling Stone.

Jennifer Hsu appears in the following:

Watching the World Cup at the United Nations

When you get all the nations playing in the World Cup together in one room, things get competitive.

After Tragedy, One Family's Mission to Make City Streets Safe

HP Liao and Amy Tam-Liao lost their 3-year-old daughter when she was fatally struck by a car while crossing the street with her grandmother.

An Outsider Tries to Crash the Democratic Party

Father Khader El-Yateem is a Palestinian Christian trying to become the first Arab-American member of the New York City Council.

VIDEO: What Are You Willing to Fight For?

From activists in the current resistance movement to a McDonald's worker just trying to survive, get to know Americans fighting for what they believe in.

The statue is part of an International Women's Day campaign to push companies towards gender equality.

When President Obama Is Right There in Your School

For these black and Latino students, seeing a portrait of President Obama in their school has inspired them to dream big.

We spoke with nine New York women about their experiences giving birth.

Only 17 miles from the Hamptons, Catholic nun Sister Margaret Smyth found a booming Latino immigrant population in need of community.

Star the Bodega Cat caused a media sensation just by doing her job.

A Sandy-Devastated Neighborhood Returns to Nature

After Sandy, some people said no one should have been living so close to the waterfront in the first place. Residents of Oakwood Beach, Staten Island, took that idea to heart.

This Is an Immigrant

Joselo Lucero's brother was killed outside of a train station in Patchogue, Long Island by a group of teens targeting Latino immigrants.

What Does It Mean to Be an American?

Bodega Cats In Their Own Words: Charlie of Carroll Gardens

Charlie the Bodega Cat has a familiar problem: an overly clingy co-worker.

Bodega Cats In Their Own Words: Bobo of Chinatown in Manhattan

Surrounded by teas, herbs and adoring fans, life is pretty relaxing for Bobo.

We're All Waiting for Something

If, as Woody Allen once said, "80 percent of success is just showing up," then the other 20 percent is simply waiting. This video celebrates the beauty of that in-between time.

Bodega Cats In Their Own Words: Snowball of Windsor Terrace, Brooklyn

One School's Experiment with Outdoor Play

These New York City kids engage with the natural world every Wednesday, for up to four hours. Here's just a slice of what they get out of it.
Read More

You Can Kick This Woman Out of Williamsburg, But She'll Come Back