In episode two of the five-part series The Best for the Worst, host Helga Davis (Einstein on the Beach) talks what happens when you get lost after your leap of faith. Music by Martin ...

Helga Davis Talks Survival in 'The Best for the Worst'

Vocalist and Einstein on the Beach principal Helga Davis hosts The Best for the Worst – a five-part series that offers a soundtrack to the hugely popular, absurdist Worst-Case Scenari... 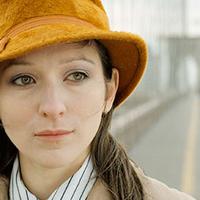 Notes from the Beach with Einstein's Helga Davis

About a week ago I got on the subway at 23rd Street and Eighth Avenue and saw it — the advertisement for Einstein on the Beach which will be part of the Brooklyn Academy of Music's Next Wave Festival.

On-Demand Webcast from the Temple of Dendur

The Wordless Music Orchestra marked the 9/11 anniversary at the Metropolitan Museum of Art on Sunday with a reflective program of Schnittke, Golijov, Ingram Marshall and William Basi...

Signs of the Times

I finally know what it is...

The birds are gone.

It was their song that welcomed me into each Spring day and the absence of their melodies has finally caught my attention.

A Little You, A Little Me

The streets of my Harlem village offer me the sights and sounds of the world. On my block alone, there’s a Mosque, a Baptist church, a Pentecostal church, a Masonic Temple, and The Church of Latter Day Saints right there on Lenox Avenue. The Senegalese drummers wake me at dawn each Monday morning with their dance, and their offerings give rise to the incense vendors who pause five times a day and offer the most beautiful music through the hum of traffic and cries of the sliced mango vendors from Mexico.