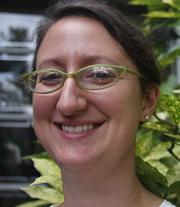 Gabrielle Langholtz is the editor of Edible Manhattan and the author of The New Greenmarket Cookbook.

Gabrielle Langholtz appears in the following:

Native New Yorker Ruby Metzner didn't know a thing about farming. But she used her marketing skills to develop a thriving pig farm.

If You Think Manhattan is Pricey, Try Buying Farmland Near New York City

Farmland in lower Hudson River counties like Columbia County can go for $7,000 to $10,000 an acre, too pricey for beginning farmers. Rental agreements and land conservancies can help.

All you need to start a farm in New York City is the right roof.

Ready to trade your metrocard for a wheelbarrow? Here’s a list of resources to help you gain the skills, find land, scale up and buy the farm. Happy hoeing.

Questions to Ask Yourself Before You Become a Farmer

The farm-to-table ethos is firmly established in New York City's restaurant scene. But a growing number of New Yorkers are becoming more interested in the farm side of the equation.

Radishes are fast to grow, fast to prepare, and delicious. Gabrielle Langholtz, author of The New Greenmarket Cookbook, explains why they provide instant gratification for farmers and cooks alike.

Here are a few suggestions on ingredients to keep in your pantry so that you can whip up a meal on a snow day or after a late night at the office. Edible Brooklyn editor Gabrielle Lan...

Farmer Craig Haney and magazine food editor Gabrielle Langholtz discuss raising and roasting turkeys. Get the low-down on what kind of bird to choose and how to keep it moist and delicious.