Professor of Public Health and Medicine at the University of Pittsburgh 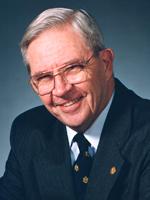 Dr. D.A. Henderson, MD, MPH, is a Distinguished Scholar at the UPMC Center for Health Security and a Professor of Public Health and Medicine at the University of Pittsburgh. He is Dean Emeritus and Professor of the Johns Hopkins School of Public Health and a Founding Director (1998) of the Johns Hopkins Center for Civilian Biodefense Strategies. From 1966 to 1977 he headed the World Health Organization’s successful campaign to eradicate smallpox (an effort chronicled in his 2009 book Smallpox: Death of a Disease), and in 2002 he received the Presidential Medal of Freedom, the nation’s highest civilian honor. He is the recipient of the National Medal of Science, the National Academy of Sciences’ Public Welfare Medal, and the Japan Prize, shared with 2 colleagues. He has received honorary degrees from 17 universities and special awards from 19 countries.

Dr. Henderson has authored more than 200 articles and scientific papers and 31 book chapters and is coauthor of the renowned Smallpox and Its Eradication (Fenner F, Henderson DA, Arita I, Jezek A, and Ladnyi ID. 1988. Geneva: World Health Organization), the authoritative history of the disease and its ultimate demise.

Donald A. Henderson appears in the following:

By Donald A. Henderson : Professor of Public Health and Medicine at the University of Pittsburgh

How would the new virus behave when schools opened in the autumn of 1957?
Read More

Swine Flu: A Look Back on the Crisis That Wasn't

What have we learned from the swine flu crisis that wasn't? Joan Nichols, associate director of research at the Galveston National Laboratory at the University of Texas Medical Branch...