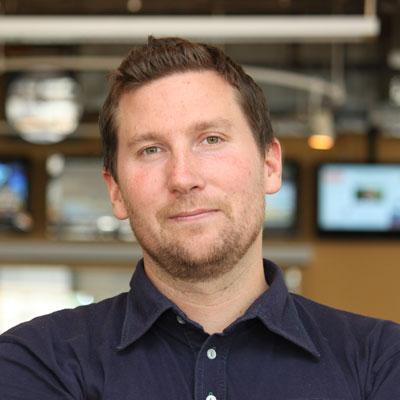 Collin Campbell joined WNYC in 2003 and has reported, edited and produced everything from local newscasts to national programming. He is a co-creator of The Takeaway and Freakonomics Radio, two programs born at WNYC, as well as Transportation Nation, a reporting project that worked with stations coast-to-coast.  His work has appeared on WNYC, NPR, The World, Marketplace and The Takeaway.

Collin is a California native, where he attended the University of California, Berkeley and worked for the San Francisco Chronicle, KALW, Weekend America and Southern California Public Radio.  In 2006, he reported on the Mexican presidential election for NPR News, The World, Marketplace and the Houston Chronicle.

Collin Campbell appears in the following:

At one camp in rural Pennsylvania, teens are allowed to bring their smartphones, tablets and other digital devices into the wilderness.

Hackathons - Who Sponsors Them and Why?

The explosion of civic-minded hackathons raises the question of what the organizations funding them are trying to accomplish.

Money Talking: What Pandit's Exit at Citigroup Says About the Future of Banks

The sudden departure of Citigroup CEO Vikram Pandit has sparked a conversation about where the bank is headed under new leadership and what it says about the so-called "too big to fail" banking behemoths.

What Kind of Friendship Is This? Devils, Rangers Fans Sit (Together) Through Hockey Playoffs

There's a lonely, whistled melody that originates somewhere around section 133 in the Prudential Center in Newark. The crowd knows it well and when it ends, the house full of Devils...

A new report issued by the city's transportation planners highlights where and why pedestrian accidents occur throughout the city. WNYC Senior Reporter Collin Campbell discusses the findings and what the Bloomberg administration is doing to make the city more walker-friendly.

What's the most dangerous intersection or pedestrian area you encounter? Any car/bike/walker incidents to report? Let us know!

Men, Not Taxis, Most Likely to Kill NYC Pedestrians

Four out of five traffic fatalities over the last five years in New York City involved male drivers -- and a similar percentage involved private drivers, not taxis, trucks or buses.

Livery Cab Crashes into Bus Stop in Bronx, Killing One

One person was killed Tuesday morning when a livery cab hit a bus stop in the Bronx.  Six other people were injured, and three remain in critical condition.

A 350-foot bridge floated into New York harbor under the cover of night this morning. It’s the replacement span for the Willis Avenue Bridge and was built near Albany and sent down the river.

At about 40 locations around downtown Denver, you can pick up a bike, ride it somewhere else and drop it off. The "Bcycle" program began yesterday, on Earth Day. Bike sharing is a mode of community transportation that's been tried in several European cities, and will be popping up in U.S. cities this summer; Denver is the first big American trial. Nathan Heffel, producer for jazz89 KUVO, checked in on the first day of Mile-High residents trying it out.

It was to be one of the national Stimulus package's proudest shovel-ready projects; high-speed rail lines brought to Florida and California. But a year after its announcement, both states continue to struggle with local issues of planning and economy. We're joined by Public Radio transportation reporter Collin Campbell, who tells us more about how the projects are running into trouble.

The Takeaway in Denver

Collin Campbell, out in Denver with John Hockenberry.

In 1985, KUVO started broadcasting here. The station began, and continues today, to be the great beating heart of jazz in Denver. Its studios sit in the Five Points neighborhood, the first predominantly African-American section in Denver, and a place famous for its cultural scene since the 1930s.

In January, KUVO started airing The Takeaway. We began to hear from Denver listeners, and we've kept an eye on the local economy, the city's future and its rising political stars.  This month, we planned a trip out to visit the KUVO community and to connect with the political mood at the 62nd Annual Conference on World Affairs. That's a forum that began as America was recovering from World War II, where they debated things like the Marshall Plan.

Attorneys general from 16 states are challenging the health care legislation that was signed into law by President Obama last month. They're contesting the constitutionality of the law.

Among the projects picked for federal stimulus spending, Florida's Orlando-Tampa high-speed rail route was a curious place to put $1.25 billion.  After all, it's Florida, and the 90-mile route runs through counties President Obama fought over tight margins of victory and defeat.  So are the voters of Polk County, smack in between Orlando and Tampa, swayed by a stop on the federally-funded transit future?  Takeaway transportation reporter Collin Campbell went to find out.

One year ago, the Obama Administration began pushing billions and billions of dollars out the door.  The federal stimulus combines tax cuts, huge chunks of federal spending and the extension of benefits in hopes of stimulating the American economy.  So how are American cities changing, and what will we remember about this massive program decades from now?

In last night's State of the Union address, President Obama proposed the ambitious goal of bringing high speed rail to America. He wants to devote eight billion dollars to be doled out to 31 states to overhaul their mass transit systems.

According to a report from the Associated Press, the security breach involved a passenger getting ...

After Contested Election, Another Term for Karzai

Afghan President Hamid Karzai will remain in office for another term after his main challenger, Abdullah Abdullah, pulled out of a scheduled runoff election. We talk with Tony Karon, ...

Pink Taxis in Puebla: By Women, For Women

The Mexican city of Puebla is trying a bright pink experiment in a culture famous for its machismo and violence. In an effort to prevent violent crimes against women passengers, 35 ne...

What Will It Take to Win in Afghanistan?

New York Times foreign correspondent Dexter Filkins recently returned from Afghanistan, where he talked with Gen. Stanley McChrystal and traveled with American soldiers in one of the ...