Chris Thile appears in the following:

Mandolinist Chris Thile joins us to talk about hosting "Live From Here" and perform in our studio.

Mandolinist Chris Thile joins us to talk about hosting "Live From Here" and perform in our studio.

Watch a live video stream as Brian broadcasts his Peabody Award-winning show from The Greene Space.

Live From Here From The Greene Space!

Host of Live From Here (and mandolinist) Chris Thile stops by to talk shop and play songs.

How Chris Thile Built An Album Out Of 'A Prairie Home Companion,' Roz Chast's Love Letter To NYC

A companion album for 'A Prairie Home.' A former New Yorker on what she loves about returning to the city.

Singer, musician, songwriter and host of "A Prairie Home Companion" Chris Thile joins us to talk about his new album “Thanks for Listening.”

It's been eight years since the phenomenal folk and bluegrass trio Nickel Creek released an album. In that time Chris Thile, Sara Watkins and Sean Watkins each pursued myriad individu...

In this episode: Nickel Creek wowed audiences when they burst onto the scene in the early '90s. A trio of precocious child prodigies -- Chris Thile on mandolin and banjo, Sara Watkins on fiddle, and her brother Sean Watkins on guitar -- Nickel Creek boasted adventurous songs that melded elements of progressive bluegrass and country, classical and jazz, traditional roots and rock, performed with ecstatic virtuosity and youthful liveliness. After eight years apart, the group recently reunited; we hear some of their new songs.

Plus: Caffè Lena is one of the most influential folk music venues you've never heard of. Lena Spencer opened the cafè in 1960 and the Saratoga stage has been hosting some of the best folk musicians around ever since -- from Hedy West and Arlo Guthrie to Don McLean and Bob Dylan. In an interview with Soundcheck host John Schaefer, Jocelyn Arem -- the director of the Caffè Lena History Project -- talks about the new book and album about the venue and its history.

This is an encore episode of Soundcheck.

In this episode: In his new book, The Bee Gees: The Biography, writer David N. Meyer looks back at the music and legacy of The Bee Gees and its trademark soaring falsetto.

Actress and soprano Audra McDonald recently starred in Broadway's revival of Porgy and Bess. Now, she's back with her first solo album in seven years, Go Back Home, featuring songs by Rodgers and Hammerstein and Stephen Sondheim, among others. McDonald performs songs from that album in the studio.

And mandolin extraordinaire Chris Thile performs the sonatas of Bach.

In this episode: We hear about the “New Hot Jazz” movement: young musicians and singers playing the jazz of New Orleans and the 1920s.

Plus: Mandolin player Chris Thile goes back to Bach on his new album. He plays live.

And: There’s a new trend in country music: the remix. We listen to some of the results when traditional country adds a dancefloor beat.

Musician and composer Kaki King creates rich sound textures with her six-string skills – so well, in fact, that Rolling ...

Punch Brothers just aren’t as young as they used to be – but that’s not saying much, considering that frontman Chris Thile recorded his first album as an 11-year-old with bluegrass band Nickel Creek. However, on Punch Brothers’ latest record, “Who’s Feeling Young Now?,” the five-piece band (now all in their mid-20s to early-30s) seems more energetic than ever. The group brings their rollicking string-band rock to the Greene Space for a live performance.

In Studio: The Goat Rodeo Sessions

Cellist Yo-Yo Ma, bassist Edgar Meyer, mandolinist Chris Thile and fiddle player Stuart Duncan have come together for an album called “The Goat Rodeo Sessions.” This all-star team joins us to perform in our studio – and to explain what the heck a goat rodeo is.

Mandolin virtuoso Chris Thile’s musical collaborations have taken varied shapes over the years, from Nickel Creek’s trio to the Punch Brothers’ sextet. But one of his latest projects is a two-sided venture with Brooklyn-based guitarist Michael Daves. The duo released an album, “Sleep with One Eye Open,” earlier this year, and joined us live in The Greene Space to regale the audience with their urban-infused bluegrass.

Mandolin virtuoso Chris Thile’s musical collaborations have taken varied shapes over the years, from Nickel Creek’s trio to the Punch Brothers’ sextet. But his newest project is a two-sided venture with Brooklyn-based guitarist Michael Daves. The duo released an album, “Sleep with One Eye Open,” earlier this year, and join us live in The Greene Space to regale the audience with their urban-infused bluegrass. 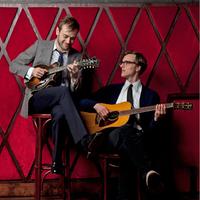 Soundcheck in The Greene Space

Soundcheck is celebrating musical collaborations in The Greene Space with mandolin virtuoso Chris Thile of Nickel Creek and guitarist Michael Daves, and bluegrass legend Del McCoury and the swing kings of the Preservation Hall Jazz Band.

Double bassist Edgar Meyer and Nickel Creek's mandolin player Chris Thile have joined forces on a new album that explores the intersections between classical and American roots music. The album features 12 original compositions by the duo, which has been performing together sporadically for the past several years. They join ...

Punch Brothers is an ensemble led by mandolin virtuoso Chris Thile of the progressive bluegrass trio Nickel Creek. The quintet’s debut is "Punch," a semi-instrumental album that combines bluegrass with modern classical and jazz. Its centerpiece is "The Blind Leaving the Blind," a suite in four movements that sketches out ...