Brian Zumhagen appears in the following:

City education officials released high-school progress reports today, saying they're encouraged by the numbers. Forty-five percent of all high schools received an A grade, while 30 percent got a B in the third annual report, which considers student attendance, performance and progress. Schools Chancellor Joel ...

Mayor Michael Bloomberg says he has a mandate for his third term as mayor of New York City, despite a narrower-than-expected victory on election night.

Michael Bloomberg says he has a mandate for his third term as mayor of New York City, despite a worse than expected performance on election night. WNYC's Brian Zumhagen reports:

REPORTER: The mayor says his 51 to 46 percent victory over Democrat Bill Thompson is not ...

In the final hours of campaigning, mayoral candidates Comptroller Bill Thompson and Mayor Michael Bloomberg are making a last campaign dash across the city.

A new poll says the race in New York's 23rd Congressional district is too close to call between Democrat Bill Owens and Conservative Doug Hoffman. GOP nominee Dierdre Scozzafava suspended her campaign Saturday after the Siena College poll showed her with just 20 percent in ...

The Floating Hospital, which has provided health care to the poor for nearly a century and a half, has cut the ribbon on its expanded, land-based main clinic in Queens. The non-profit renovated the Long Island City facility with $1.3 million in federal stimulus funds. ...

Buildings officials say 541 construction sites citywide are stalled as a result of the recession and a bill before the City Council this week would offer developers incentives to make sure those inactive sites are safe, and secured.

"A senseless act." That's what Mayor Bloomberg called last week's killing in Queens of a 13-year-old boy by a stray bullet, fired by another teenage boy. Bloomberg visited the Cambria Heights neighborhood where Kevin Miller died. He defended the NYPD's work in the area, saying ...

Vaccinations in Preparation for Swine Flu

In preparation for giving swine flu vaccinations later this month, nurses are giving out free seasonal flu shots all this week at six New York City public schools. About seven hundred children are expected to get the seasonal vaccination at P.S. 46 in the Bronx, ...

The Bell Tolls for Peace 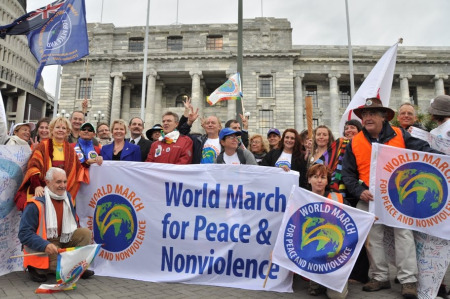 A bell that calls Buddhists to meditation rang out this morning at Battery Park as leaders from different religious groups marked the launch ...

One thousand building superintendents will be getting training on how to make their buildings more energy efficient.

REPORTER: Mayor Bloomberg says the 40-hour program trains supers to pay attention to the small things they can do to reduce energy usage.

BLOOMBERG: Sealing up the cracks that allow ...

Ten library branches around the city will now open earlier and close later to meet growing demand. The mid-Manhattan library on 5th Avenue at 40th Street is one that will expand its hours, opening at 8 am and closing at 11 at night.

Bloomberg: Fed Not to Blame for Financial Crisis

Mayor Bloomberg says President Obama is taking on an issue that other administrations have ducked: that of reforming and regulating the financial industry. While others, including former governor and so-called Wall Street Sheriff, Eliot Spitzer, have blamed the Federal Reserve for not doing enough, the ...

"Nobody Really Asked About the Consequences": The Fall of the Wall

Back in 1987 and 1988, when I was 18 years old, I was an exchange student in the West German industrial city of Gaggenau, near the northern Black Forest. My class at the Goethe-Gymnasium would go on to graduate the following summer, as the East German regime was beginning to come apart. This year, the Class of '89 held a reunion, and I attended. I gave some of my former classmates a chance to practice their English and reflect on the past 20 years of German history.

Every November when the anniversary of the fall of the Berlin Wall rolls around, I think of my history teacher from my exchange year. She came to visit me during my sophomore year at UC Berkeley, in September of 1989. One day, during a walk in San Francisco, we were crossing underneath the eyesore that was the double-decker Embarcadero Freeway, so we could get a look at the waterfront. My former teacher remarked that she had been reading an American newspaper, and that there was talk that the reunification of Germany could be coming. She rolled her eyes and asked, “Reunification?! Where did they get that idea?”

Just a few weeks later, the Embarcadero Freeway was irreparably damaged by an earthquake, and tourists were taking hammers and chisels to the Berlin wall.

The collapse of the East German regime looks like an historical inevitability in retrospect, so it can be hard to remember just how unlikely it seemed just weeks before it happened – especially to Germans. I arrived in Germany right after Ronald Reagan stood in front of the Brandenburg Gate in Berlin and said, “Mister Gorbachev, tear down this wall.” I remember clearly how Germans cringed at that speech, which was by turns dismissed as hilariously naïve or dangerously provocative – when it was commented upon at all. The consensus among the West Germans I met back then was that the policy goal should be to accept the reality of German division and try to negotiate toward a more comfortable coexistence between the two states. Talk of unification was seen as irresponsible, something only the right-wing tabloid press would indulge in.

West German Class of '89 Looks Back at Unification

Germans are preparing to mark the 20th anniversary of the fall of the Berlin Wall this November. WNYC's Brian Zumhagen has been reflecting on this milestone, too. From 1987-88, he was an exchange student in a small West German industrial city called Gaggenau. His classmates ...

The Manhattan District Attorney's office is scrutinizing the city's concrete industry. A lab that tests the quality of concrete used at major projects across the city has been indicted for allegedly falsifying those results. Here to tell us more about this is WNYC's Bob Hennelly.

A Manhattan nightclub bouncer has been convicted of first-degree murder in the slaying of a graduate student from Boston. Parolee Darryl Littlejohn faces up to life in prison in the 2006 death of criminal justice student Imette St. Guillen of Boston. His sentencing is set ...

Two Belgian brothers who’ve changed the world of cinema, Jean-Pierre and Luc Dardennes, have emerged in the last decade to be two of the most influential international filmmakers working today. A festival devoted to their work opens this week. Film critic Nathan Lee talks to ...

What happens when a work of art that was once seen as avant-garde becomes a classic? And then a director or dance troupe wants to revive it. What kind of approach should they take? Cultural critic Claudia La Rocco has some Spring picks that bring ...

FEAST -- a Sustainable (and Tasty) Approach to the Arts

Necessity is the mother of invention and WNYC's cultural critic Claudia La Rocco taps into a few ways artists are coping with the economic downturn, and fostering new kinds of artistic communities.