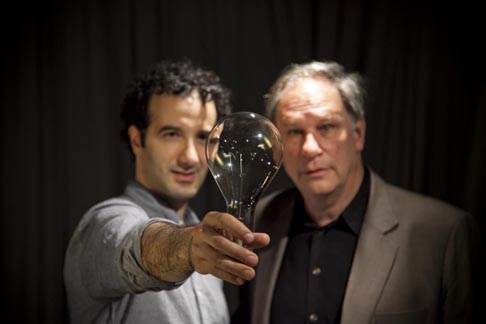 RADIOLAB is public radio’s cult sensation about science, wonder and discovery. With curiosity and wit, co-hosts JAD ABUMRAD and ROBERT KRULWICH explore big questions – Time, Music, Words - through science, philosophy, human experience and experimental audio.  The result is a potent elixir of interviews with experts, first-person storytelling and radio theatre, all wrapped up in some of the most innovative sound design ever to spill out of the radio.

“Radiolab is a testament to the power of radio to tackle big ideas, spark curiosity, and tell real stories by real people… and to experiment with the medium itself,” said Laura Walker, President and CEO of New York Public Radio. “We are extraordinarily proud of Jad and Robert and the Radiolab team for proving that radio is not only not a ‘dated’ medium, but also on the cutting edge. We are gratified that the Peabody committee has honored their innovation and creativity.”

The winners of the 70th Annual Peabody Awards were announced today by the University of Georgia’s Henry W. Grady College of Journalism and Mass Communication.  The Peabody Award is among the most prestigious awards for broadcasting and cable excellence, and given solely on merit rather than within designated categories. The awards will be presented in May at a luncheon at the Waldorf-Astoria Hotel in New York.

In recent years, WNYC Radio has also won Peabody Awards for programs including The Brian Lehrer Show, On The Media, Radio Rookies, and Studio 360 with Kurt Andersen.