Wednesday, May 18 at 7pm at The Greene Space at WNYC and Live Video Webcast at www.thegreenespace.org 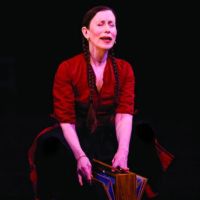 (May 4, 2011 – New York, NY) – To celebrate the record release of the highly lauded work, Songs of Ascension, New Sounds Live will present an exclusive NYC performance of new music arrangements of  this haunting piece by MEREDITH MONK.

The event will take place at The Jerome L. Greene Performance Space on Wednesday, May 18 at 7pm.

The evening will blend music and conversation as New Sounds host JOHN SCHAEFER talks with Monk about the creative process for this piece – which includes inspiration from an encounter with a Zen Buddhist priest – and Monk’s pioneering and inimitable career. Meredith Monk & Vocal Ensemble, along with the Todd Reynolds Quartet, will perform selections from Songs using a combination of voices and instruments including strings, reeds, percussion and the Indian shruti box to envelop the audience in contemplative, celestial sound.

“Over the past 25 years, New Sounds listeners have had the chance to hear Meredith Monk in our studio and in our live concert series, often unveiling new works,” said Schaefer.  “A few years back, Meredith performed some of her brand new Songs of Ascension in our studio; it was a magical moment, and all I could think was, ‘I wish I weren’t the only person in here witnessing this.’  Now, everyone at The Greene Space, as well as those joining us online, will have the chance to share that experience.”

Songs of Ascension debuted to rave reviews in October 2008 and was later conceived for an innovative presentation at the Guggenheim that included 120 performers sprawling through the tiers of the Museum.  The work was last performed in New York in 2009 at the Brooklyn Academy of Music and recently won the Herald’s Angel Award at the Edinburgh International Festival.

Tickets are $20. The event will also be available as a live video webcast at www.thegreenespace.org, and will stream live on Q2 – WQXR’s dedicated new music webstream – at www.wqxr.org/q2.

The press release announcing the record release may be accessed here: http://meredithmonk.org/temp/MonkSongsofAscension.pdf.

New Sounds provides a place for your left and right brain to unwind at the end of day. Host John Schaefer combs recent recordings for one of the most educational and enchanting hours on radio. For 20 years, he’s been finding the melody in the rainforest and the rhythm in an orchestra of tin cans. The program offers new ways to hear the ancient language of song. With guest musicians from David Byrne to Meredith Monk to Ravi Shankar, Schaefer presents performances and premieres new works from the classic and operatic to folk and jazz.