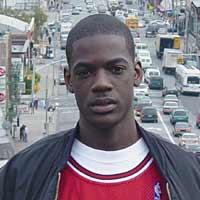 I was born in America, but my parents come from Trinidad. I am 17 years old. My hobbies are drawing and writing. There are six other people in my family: My mother Betty, my sisters Janelle and Petra, my brother Reynold, my father James and my little precious cute one year old niece Jandora, who's also Czerina's (Radio Rookie Producer's) godchild. I joined Radio Rookies for a reporter's experience. My sister Janelle was a Radio Rookie and encouraged me to join. So far, I've enjoyed my experience, and for the girls, I'm single.

Michael Lewis appears in the following:

Michael Lewis on the Unlikely Friendship that Revolutionized Decision-Making

How psychologists Daniel Kahneman and Amos Tversky created the field of behavioral economics and changed the way we think.

A year after the release of his book "Flash Boys," which exposed the dodgy practices of high frequency traders, author Michael Lewis says it is business as usual on Wall Street.

Also on Today's Show: After Heartbleed, the tech industry is coming together to fund a group to maintain OpenSSL...The U.S. Highway Trust Fund needs about $302 billion in order to giv...

How one group of guys figured out that the stock market was being rigged for the benefit of insiders.

Michael Lewis talks about his interviews with President Obama, who he spoke with multiple times over six months—on Air Force One, in the Oval Office, and on the basketball court. Lewis’s article “Obama’s Way,” in the October issue of Vanity Fair, covers the president’s views of his life in the White House, the high price that comes with the job of being the president, his responsibilities, and his relationship with the news media.

Rookie on the US War in Iraq

Midwood Graduate Rookie Michael Lewis comments on the war in Iraq. He had opposed it all along -- until he saw something on TV that made him stop and think.

Michael Lewis, seventeen, is a second generation Trinidadian American who lives in Brooklyn with his parents, siblings, and niece.