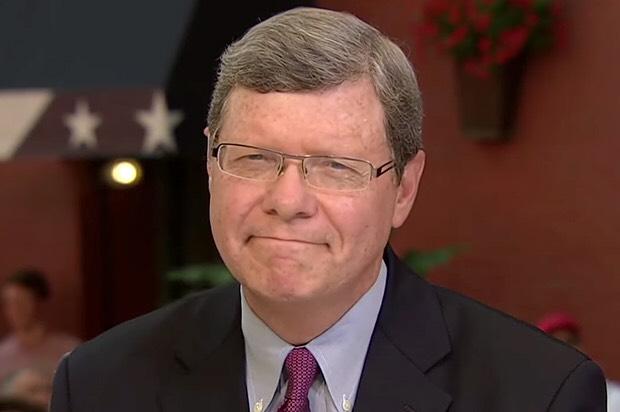 Charles J. Sykes is one of the most influential conservatives in Wisconsin.

Until he stepped down in December after 23 years, Sykes was one of the state’s top-rated and most influential talk show hosts. He is currently an MSNBC contributor.

Charles J. Sykes is one of the most influential conservatives in Wisconsin.

Until he stepped down in December after 23 years, Sykes was one of the state’s top-rated and most influential talk show hosts. He is currently an MSNBC contributor.

Sykes is also author of eight books, including A Nation of Victims, Dumbing Down Our Kids, Profscam, The Hollow Men, The End of Privacy, 50 Rules Kids Won't Learn in School,  A Nation of Moochers, and Fail U. The False Promise of Higher Education. He was co-editor of the National Review College Guide. He is currently working on a book titled “How the Right Lost Its Mind, which will be published by St. Martin’s Press in October 2017.

Sykes has written for The New York Times, The Wall Street Journal, Politico, Salon, USA Today, National Review, The Weekly Standard and other national publications. He has appeared on the Today Show, ABC, NBC, Fox News, CNN, PBS, the BBC, and has been profiled on NPR. He has also spoken extensively on university campuses.

He is also the founder and editor in chief of the website Right Wisconsin. Sykes is a senior fellow at the Wisconsin Policy Research Institute, where he is editor of the group’s magazine, “Wisconsin Interest.”

He lives in Mequon, Wisconsin with his wife and two (soon to be three) dogs. He has three children, and two grandchildren.

Charlie Sykes appears in the following:

The Day After Election Day

How the democratic process has held up this election.

Conservatives who’ve shunned the GOP say it’s given up on democracy. Which begs the question: How long ago did that happen?

After four nights of RNC speeches, what did we learn?

Guests look at what issues both Democrats and Republicans have chosen to campaign on this election season, and what the choices say about the culture

'The Eights' series concludes at a look at what divides Americans in 2018 and what 2028 might look like.

How The Right Went Wrong

Charlie Sykes explains why the conservative movement isn't what it used to be.

Watch Brian's broadcast from The Greene Space, featuring Gorsuch commentary, an Indivsibile Radio roundtable, and a Muslim comedian's story of sitting next to Eric Trump on a plane.

National Politics with the Hosts of Indivisible Radio

The hosts of Indivisible Radio are all together for the first time at The Greene Space covering the latest in politics.

The Latest in Politics with Charlie Sykes

Longtime Conservative talk show host, Charlie Sykes, weighs in on the latest news and the potential future of the Conservative movement under the Trump administration.

Sykes, a longtime conservative radio host and one of the upcoming hosts of WNYC's new call-in show, Indivisible, discusses the first weekend in Trump's "alternative-factual presidency."

Why are we producing 100 days of live radio? Listen to find out. Indivisible premieres on January 23rd from WNYC, MPR and The Economist.

Charlie Sykes has hosted a conservative radio show in Wisconsin for about 25 years. He says Trump has made this year unlike any other.

House Speaker Paul Ryan will meet with Donald Trump on Thursday, just days after the presumptive Republican nominee said that he's not interested in unifying his party.