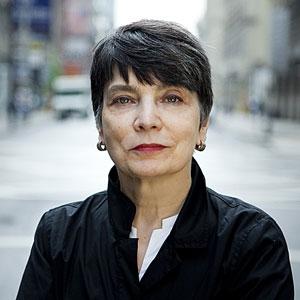 Sara Fishko is an Executive Producer and Host at WNYC, specializing in culture.

Her long-running series Fishko Files has become a staple of WNYC’s cultural programming, tackling a broad range of subjects, from a portrait of media guru Marshall McLuhan, to a meditation on the Symbolist painting  “Isle of the Dead,” to a consideration of the future of film criticism.  The pieces run on Morning Edition and All Things Considered, as well as Studio 360 and On The Media.

Fishko produced and hosted the ten-part Jazz Loft Project Radio Series, derived from a treasure trove of archival tapes recorded by  photographer W. Eugene Smith in his dilapidated Manhattan home in a loft building in the 1950s and 60s. The series, which ran on WNYC and NPR, later became four special programs known as The Jazz Loft Anthology.

She has also made compelling hour-long programs featuring interviews with and performances by Keith Jarrett, Dave Brubeck, Ned Rorem and others. Her special program Culture Shock 1913 is a spirited telling of the history and development of Modernist art and culture in the early years of the 20th century.

Sara Fishko has won multiple awards from RTNDA (Edward R. Murrow Award), The Deadline Club, The Newswomen’s Club of New York (Front Page Award), The Associated Press and The New York Press Club. She received a Deems Taylor Award from ASCAP for the Jazz Loft series, and was selected as a USC/Annenberg Arts Journalism Fellow in 2003 and 2011.

Her blog Fishko Now and Then is about culture now and culture then, and it appears…now and then.

Sara Fishko appears in the following:

Composer Aaron Copland and the search for an American national identity.

60 years ago, a still-celebrated speech rocked the world of broadcast television.

At 102 stories, the Empire State Building's height is only one of the ways it towered over all the rest.

From the archives: Barbara Stanwyck was just one of a generation of Hollywood actresses who worked fiercely to hold onto their eccentricities of style, stance and voice.

From the archives: What's the connection between a poet's speaking voice and the poems they create?

Peter and the Wolf

Prokofiev's Peter and the Wolf has been recorded and performed countless times - but the millions of children who listened over the years only knew part of the story.

Bernstein, Made for TV

From the archives: In the early, intrepid days of live TV, Leonard Bernstein brought classical music to the masses.

From the archives: The tradition of siblings performing together is as old as song.

A hundred years ago, a popular song appeared at a time similar to our own - when people desperately wanted to 'move on' from crisis.

From the archives: The classical music prodigy was a phenomenal player - with a tragic story.

From the archives: Cain's books provided 1940s Hollywood with plenty of material for its dark dramas.

Over time, pieces of music can change in impact.

From the archives: Frédéric Chopin borrowed from the music he loved and turned it into something completely original.

When she moved in, Ms. Kennedy said the White House looked like a hotel furnished from a January clearance sale. So she redecorated, and the results were showcased on national TV.

The recent death of screenwriter Walter Bernstein has WNYC's Sara Fishko ruminating on the subject of dissent, protest and the movies.

From the archives: North was known for his sharp and observant film scores - and his modesty.

From the archives: The multiple-Oscar-winning Chayefsky fought to the death for every fierce and furious word he wrote.

A new documentary offers a dark and revealing update to civil rights history.

Man with a Movie Camera

From the archives: 125 years after the birth of Dziga Vertov, the Russian filmmaker's "Man with a Movie Camera" remains a classic of the silent film era.

Life of the Party

From the archives: In this last gasp of 2020, we face a New Year's without parties - unless you count the ones in this Fishko Files episode.