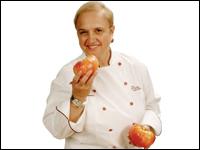 Lidia Bastianich is an acclaimed chef, businesswoman and restaurateur known worldwide. Specializing in Italian and Croatian cuisine, she has been a regular contributor to the PBS cooking show lineup since 1998. In 2007, she launched her third TV series, Lidia's Italy.

She also owns four Italian restaurants in the U.S. in partnership with her son, winemaster and restaurateur Joseph Bastianich: Felidia and Becco in Manhattan; Lidia's Pittsburgh in Pittsburgh, Pennsylvania; and Lidia's Kansas City in Kansas City, Missouri. Her latest cookbook, Lidia Cooks From the Heart of Italy, offers an array of 175 regional Italian recipes.

Lidia Bastianich appears in the following:

Restaurateur and television star Lidia Bastianich writes about her journey from Istrian immigrant to grande dame of Italian-American cooking.

Lidia Bastianich talks about her new PBS special, “Lidia Celebrates America: Home for the Holidays,” and her latest book, "Lidia's Mastering the Art of Italian Cuisine"

Lidia Bastianich talks about her new children’s book, and reminisces about growing up on the farm, raising chickens, and gathering their eggs.

Chicken and potatoes, fried together in a big skillet so they are crisp and moist at the same time, is Lidia's mother’s specialty.

Leonard Lopate talks with Lidia Bastianich, David Bouley and Andrew Carmellini about the thrills and challenges of building a collection of restaurants in New York City and beyond. 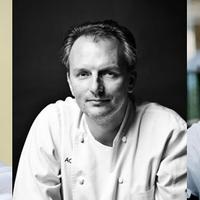 Restaurateur Lidia Bastianich explains what you need to know about Italian olive oil. Also, try her recipe for olive oil and rosemary spaghettini.

Award-winning television host and cookbook author Lidia Bastianich explained that once you master the technique of making risotto, nearly any ingredient can be added as a highlight — ...

Lidia Bastianich discusses her one-hour special, “Lidia Celebrates America: Freedom and Independence.” She and a few celebrity guests travel the country exploring how various cultural groups observe different symbolic events marking independence. She also shares her own personal tale of escaping from behind the Iron Curtain at age 12, outrunning bullets and dogs to cross the border. “Lidia Celebrates America: Freedom and Independence” airs June 28 at 10 pm on PBS.

Lidia Bastianich talks about the foods and traditions of an Italian Easter. She’ll also talk about teaching her kids how to cook and about her latest book, Nonna’s Birthday Surprise, ...

Lidia Bastianich talks about her latest cookbook, Lidia’s Favorite Recipes: 100 Foolproof Italian Dishes, from Basic Sauces to Irresistible Entrees. It’s a gathering of the recipes that have become her go-to meals for her very own family, and the book is a love letter to her fans. She shares recipes for the best, the most comforting, and the most delicious dishes in her repertoire.

The first part of Globavores, our 8-week series about the Columbian Exchange, kicks off today with a look at the tomato and its 500- year journey from mesoamerica across the globe. We'll speak with Andrew Smith, culinary historian and author of The Tomato in America and with chef Lidia Bastianich, whose latest cookbook is  Lidia's Favorite Recipes.

Lidia Bastianich talks about visiting Italian American communities around eth country that created something new out of the recipes passed down from their ancestors. Lidia’s Italy in America explores this distinctive cuisine, showing us that every kitchen is different, every Italian community distinct, and little clues are buried in each dish—from the Sicilian-style semolina bread and olives in New Orleans Muffuletta Sandwiches to the Neapolitan crust of New York pizza.

Chef and restaurateur Lidia Bastianich shares the story of the Christmases she used to celebrate in Italy. When Lidia was a child, she spent Christmas with her grandparents, where she learned to cook with her Nonna Rosa, and Nonna Tell Me a Story is a picture book about her Christmas traditions, delicious recipes, and decorating ideas.

Lidia Bastianich and Her Mother

Chef and restaurateur Lidia Bastianich and her mother, Erminia Motika, talk about Italian food. They’ll speak with Christopher Walken about their shared roots in Astoria, Queens. Lidia Bastianich is the author of many cookbooks, including her most recent book: Lidia Cooks from the Heart of Italy: A Feast of 175 Regional Recipes. 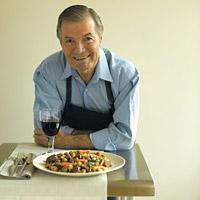 Lidia Bastianich stopped by The Leonard Lopate Show to talk about the plays and books that have moved her the most!

Lidia Cooks from the Heart of Italy

Lidia Bastianich inspires new respect for food and for the people who produce it in the little-known parts of Italy. Her newest cookbook, Lidia Cooks from the Heart of Italy: A Feast of 175 Regional Recipes, includes recipes from all over Italy, translated for home kitchens.

Celebrity chef Lidia Bastianich explores the culinary traditions of 10 of her favorite regions in Italy--from Piemonte to Puglia--which are often overlooked. She's collected 140 recipes for her new cookbook, Lidia’s Italy(PDFs).