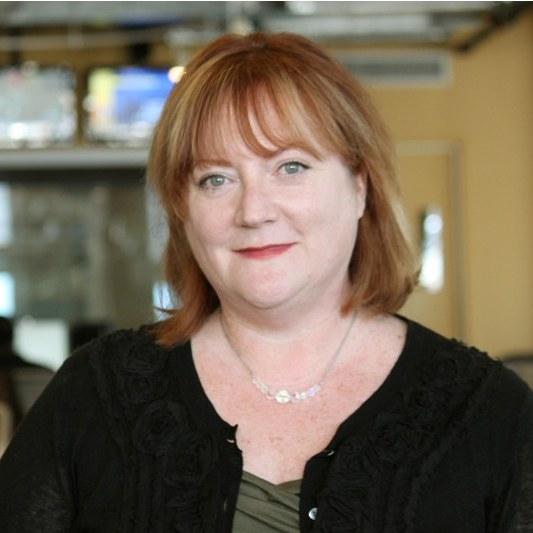 Kerry Nolan anchors the morning newscasts on WQXR. She came to WNYC in 1993 and has been local host for Weekend All Things Considered and Weekend Edition Saturday and Sunday. She has filled in as guest host on WNYC produced programs including The Brian Lehrer Show, The Leonard Lopate Show, Soundcheck and On the Media.

She also spent many late nights filing breaking news stories for NPR. In 2005, Kerry left WNYC to host a lifestyle talk show for the Martha Stewart channel on Sirius/XM, but returned to her radio news roots in 2008. Her radio career began in Boston as producer and voice talent at the legendary rock station WBCN. She lives on the Jersey shore with her husband and son.

Kerry Nolan appears in the following:

Rep. Alexandria Ocasio-Cortez returned to Iowa to stump for Senator Bernie Sanders, with just a week to go before that state holds the nation’s first presidential nominating contest.

The state report, which found that Staten Island has an exceedingly high thyroid cancer rate, relied on data from before the Fresh Kills landfill was used to store debris from 9/11.

The Queens District Attorney's Office has come under fire from criminal justice reform advocates, and is currently facing several lawsuits alleging misconduct by its prosecutors.

In "Side By Side," filmmakers Glenn and Julie Morey share the stories of 100 South Korean adult adoptees. "The most commonly used phrase of all was, 'I was the only one.'"

This summer, the Royal Danish Ballet lands in New York, Mark Morris brings a world premiere and the Film at Lincoln Center presents its annual festival of dance on camera.

On this week's look ahead: the recount begins in the Democratic primary for Queens District Attorney. NYC expands speed cameras. And: the U.S. Women get a ticker tape parade.

Rev. Dr. LaKeesha Walrond is Ready to Minister to the Masses

The 119-year-old New York Theological Seminary now has its first black president. "It's exciting," says Dr. LaKeesha Walrond. "But you wonder why and how did it take so long."

Coming up this week: the disciplinary trial of NYPD officer Daniel Pantaleo continues. It's crunch time for Albany legislators. And: New Jersey's primary is Tuesday.

In her new graphic novel, Indian-American author Mira Jacobs captures conversations with her son about growing up brown in New York City.

Top NYPD brass ordered the DNA swabbing of 360 black and Latino men during their search for the killer of a Howard Beach jogger. Now some are sharing their stories.

In this week's look ahead: NYC's mayor celebrates a birthday — and eyes a presidential run. Ride share drivers hold a work stoppage. And Albany looks at specialized high schools.

Surprises, Serena and Summer Heat at the 2018 U.S. Open

With summer produce season in full swing, we went digging for some new standouts, and honed in on fairy tale eggplant and Japanese peppers with pizzazz.

Help Us Monitor How Voters Are Targeted Online

With the midterms in full swing, WNYC is partnering with ProPublica to collect political ads in your Facebook newsfeed, add them to a public database and analyze how they're used.

City Council Races 2017: Change is Coming to the South Bronx

WNYC is taking a closer look at contested City Council races that could have implications citywide. Here's how the race looks in District 8.

City Council Races 2017: Fighting Resentment in the Upper West Side

WNYC is taking a closer look at contested city council races that could have implications citywide. Here's how the race looks in District 6.

WNYC is taking a closer look at contested city council races that could have implications citywide. Here's how the race looks in District 35.

City Council Races 2017: Church and State in the Southeast Bronx

WNYC is taking a closer look at some of the most competitive City Council races in partnership with City Limits and Gotham Gazette.

WNYC is taking a closer look at contested city council races that could have implications citywide. Here's how the race looks in District 2.