Joel Meyer appears in the following:

Everybody’s Talkin’ About Harry Nilsson; Missed It Then, Love It Now; Laila Biali In Studio

In this episode: Harry Nilsson was one of the most famous musicians on the planet in the early 1970s. But by the time he died in 1994 at the age of 52, most people had forgotten his name, even if they never forgot his hits like “Coconut,” and “Everybody's Talkin’.” We discuss the enigmatic musician with Alyn Shipton, author of the new book Nilsson: The Life of a Singer-Songwriter.

Plus: Soundcheck producer Joel Meyer answers our question of the week when he shares a song he missed out on, but that he loves now.

And: Canadian jazz vocalist and pianist Laila Biali plays live in the studio.

Soundcheck producers Gretta Cohn and Joel Meyer share some of their answers to the 2012 Music Survey -- and they nearly come to fisticuffs over K-pop star Psy and his megahit "Gangnam...

Soundcheck Executive Producer Joel Meyer gives us his favorite music of the year.

The Musician In Chief: Our October Surprise

As Soundcheck's senior producer and "chief political analyst," I spend a lot of time crunching poll numbers, creating colorful maps and Facebooking with my vast array of confidential sources inside the Beltway. It's not an easy job, but I'm able to connect dots that are beyond the grasp of other music shows on public radio.

For example: I recently uncovered a disturbing fact: Neither of the major candidates is a musician. Sure, Barack Obama can sing a little Al Green, and Mitt Romney apparently owns an iPod that his running mate hates. But they're hardly the kind of boundary pushing artist we celebrate every day here at Soundcheck.

Ask yourself: What if a real musician became president of the United States?

Join Soundcheck for an "October surprise" we're calling The Musician In Chief. Over the next few weeks, special guests will nominate eight musicians and make a case for that artist to become commander in chief. (Yes, even if that person is a drummer.)

Then, you'll be asked to exercise your civic duty to vote in a non-binding, non-scientific, online-only election. The winner will be announced on the show on Nov. 5.

[Important disclaimer: The musician will not actually assume the presidency, unless the winner of the Romney-Obama contest cedes his victory to our winner. – The Lawyers]

START THE CONVERSATION: Who do you think should become the first "Musician In Chief"? Our only rule: Your nominee must be a living artist. Copy and paste the questionnaire below into our comments section, or email your response to soundcheck@wnyc.org

Nominate Your "Musician in Chief"

During first 100 days in office, what will your candidate achieve?

Mick, Keith and a 'Friend'

When we asked listeners to tell us about being in music videos, our listener Eddie chimed in with the time he served as an extra for the Rolling Stones.

Gil Scott-Heron, In His Own Words

The late musician and writer Gil Scott-Heron will be remembered with a lifetime achievement award during Grammy festivities this weekend. Today: How the artist's posthumous memoir is adding a new chapter to the story of his life. Plus: reunited Irish pop band The Cranberries plays live in our studio.

The former Creedence Clearwater Revival frontman talks about "vindication" and a solo hit from 1985.

For more than two years, a company called Spotify has been operating in Europe, with 10 million users taking advantage of a digital music service with an almost bottomless supply of songs. And, after a long wait, Spotify launched in the U.S., last Thursday. Our senior producer, Joel Meyer, weighs in on the service after taking it for a test drive over the weekend.

If you want to enter our Remix the Rails song contest, you'll have to get cracking! Our deadline for submissions is this Monday, March 14 at 9 a.m. ET. So, cancel your plans for this weekend and hole up with your laptop, instruments, pen and paper, side musicians, etc.

Check out this song entered by The Reverend MC Daniel Fiesta. It's called "World-Bound Train."

Picks of the Week

Iceland’s troublemaking volcano has been back in the news, and that country's music is back in our weekly picks.

A Cappella Gets the Ben Folds Treatment

Fair warning: In the words of a certain hollerback girl, collegiate a cappella is about to go b-a-n-a-n-a-s.

Atlantic Records signed the Indiana University group Straight No Chaser to a five-album deal. The group sold an impressive 100,000 copies of their Christmas CD over the holidays. Meanwhile, NBC has ...

Michael Benjamin Lerner of the Seattle-based band Telekinesis talked to us for a recent "Last Night, Right Now and Beyond" podcast on the Art.Cult blog. The 22-year-old songwriter told us why he was looking forward to his first visit to the ... 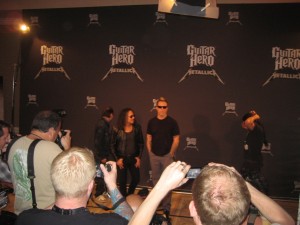 The worst-kept secret of the week was Metallica's performance at Stubb's on Friday night. Promotional events for the band's forthcoming 'Guitar Hero Metallica' video ...

A live report from Soundcheck producer Joel Meyer on this year's South by Southwest Festival in Austin, TX. 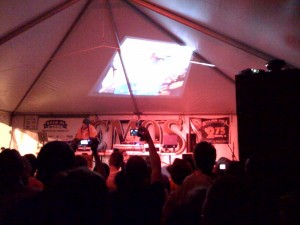 DJ duo NASA performs in the tent outside Emo\'s.

How does Austin handle the electricity needs of 1,900 bands and thousands of South by Southwest attendees? Pretty well, if you ask me. (Pssst: AT&T Wireless ... you should learn a thing or two from these guys.) 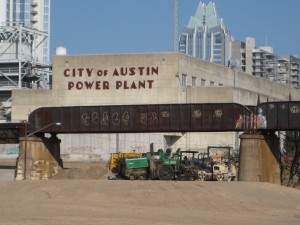 Metal From Montreal, Rockabilly from Spain 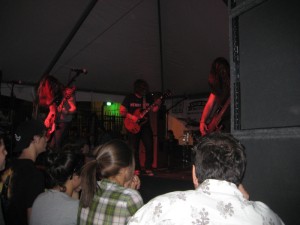 With 1,900 bands in Austin, it's pretty easy to hear just about anything at South by Southwest. I caught about six shows on my first evening in town, and I can now tell ...
Read More 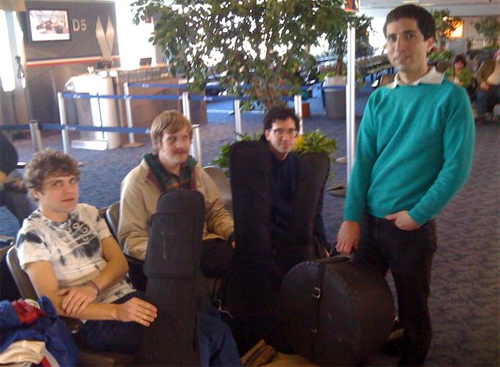 Once you've taken three trains and a bus to get to La Guardia, the SXSW experience begins at the boarding gate. The Austin-bound seem to stick out a bit, often because they're carrying precious cargo.

Today marks the first day of the music portion of the annual South by Southwest conference. Film geeks and tech geeks have been swarming around Austin since last week. Now, the music geeks get their turn in a bonanza that includes some 1900 bands.