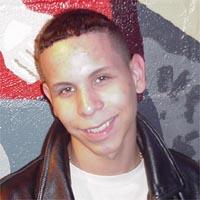 My name is Jesus. I am 15 years old and a youth organizer at Make The Road By Walking, a non-profit organization.

I am in 10th grade at Bushwick High School. I live in Bushwick Brooklyn, NY where my radio recordings take place. (October 2000)

Interesting fact: I have a dead cat named Ooki.

Radio Rookies 10 Year Anniversary: Where Are They Now?

To celebrate the 10-year anniversary of Radio Rookies, we're bringing you updates from Rookies whose stories aired years ago. Jesus Gonzalez and Jose Lopez were in one of the earliest Rookies workshops, in 2001. At the time, they were working as youth organizers at the community group Make the Road New York in Bushwick, Brooklyn. Almost a decade has passed and they're still there. But their group has grown to more than 70 young members.

For Jesus, it’s one of those nights when you’re young that almost sends your life in an entirely different direction. This is a story about the most basic kind of survival.

Advice to the Mayor

My story is about how easy it is for kids in Bushwick to get guns. I interview gun dealers, my principal and crime fighters.