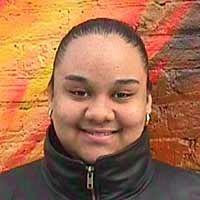 Hi, I'm Nesse. I go to Alfred E. Smith High School in the Bronx. I have a busy life. I love music and photography. I really like to have fun. (February 2001)

Interesting Fact: When I was about 8 year old, I fell into a lake, and my uncle jumped in after me. Instead of trying to save my life, he went after my shoe.

Janesse Nieves appears in the following:

The Rookies share their thoughts about the World Trade Center tragedy of September 11th.

Janesse says she and her mother have one thing in common -- they were both betrayed by Janesse's father. He left them for Heroin when she was in elementary school.