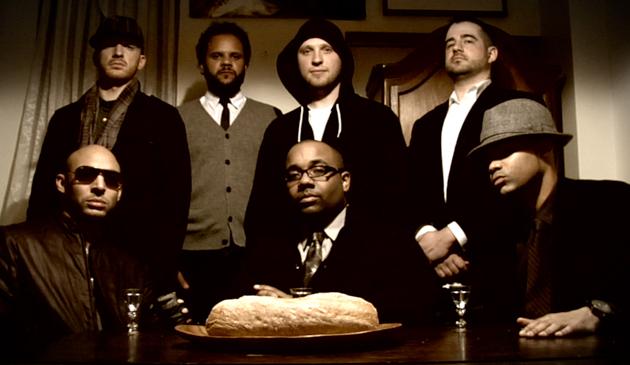 Dujeous is pronounced “doo-jee-us.” But it's not about their name, it's about who they are: a seven-man band, raised in the ways and days of old New York. Friends since elementary school, the Dujeous crew blew up through the NYC underground, selling out clubs, throwing monthly showcases that featured the best MCs in the Northeast, and burning up the airwaves of the legendary Stretch Armstrong radio show.

MCs Mojo, Mas D, and Rheturik keep the lyrics smart and to-the-point. Bassist Apex and drummer Tomek still provide that lunchroom-table boom-bap, while guitarist Taylor Rivelli and trumpeter David Guy (also a member of the Dap-Kings) still bring twisted jazz, funk and rock melodies. But there are new ingredients in the mix: keyboardist Borahm Lee (Lee Scratch Perry, Matisyahu) has joined the band, bringing spaced-out textures from dub and beyond. Dujeous didn’t stop there—strings, accordion, mellotron and other instruments from around the world have been added to the arsenal.