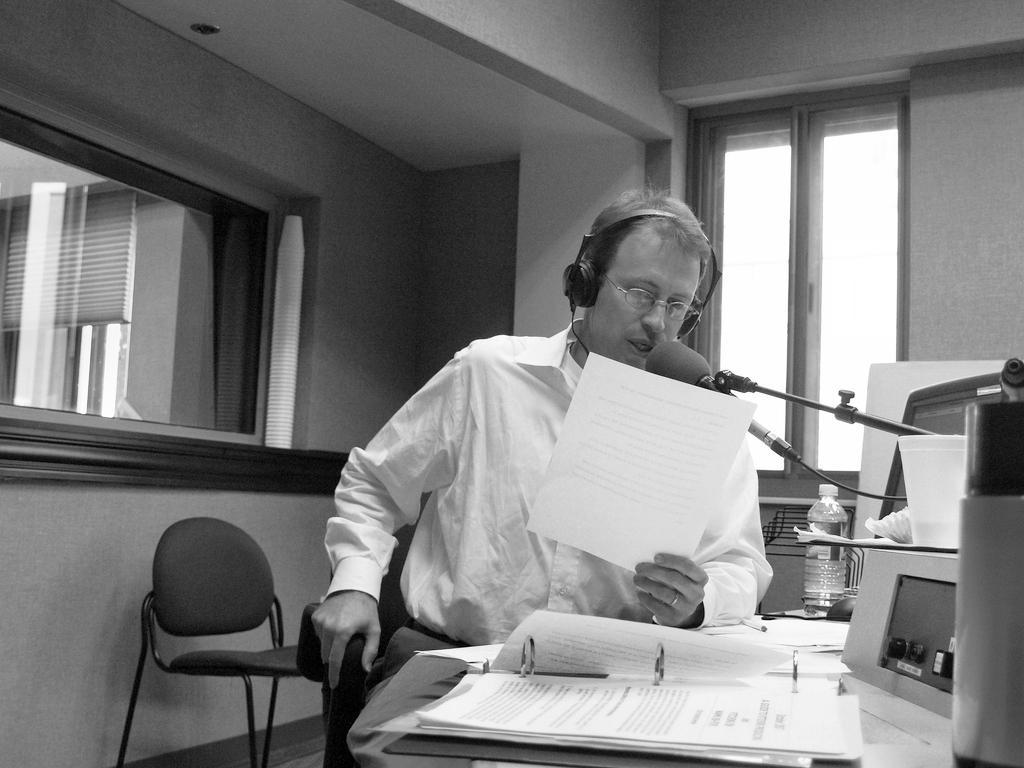 David Furst is the Weekend Edition Host for WNYC - and is also host of The Christie Tracker Podcast.  He joined WNYC and New Jersey Public Radio in 2012.  He was born and raised in the Garden State so he really has no excuse if he pronounces the name of your town wrong.

He spent more than a decade reporting and producing for WAMU in Washington, D.C., where he was the host and executive producer of a weekly news and culture magazine. During his time in the nation's capital, he also produced award-winning documentaries like 20th Century Washington, Rock Creek Park: Gathering Place and Dividing Line and The Washington Opera Goes to Japan, where he followed Placido Domingo and the company during their first international tour.

In the mid-to-late 90s, David worked as a classical host for KPAC in San Antonio and launched a live contemporary music show for sister station KSTX.

He lives in Chatham, NJ with his wife, two children and an alarmingly large record collection.

David Furst appears in the following:

It's no surprise that beach season will look totally different this year. And it's not too surprising that elected leaders couldn't agree on how different it should be.

The New Jersey Senate President joins us to discuss the latest on the pandemic.

This week's election offers a test run for the upcoming presidential contests in the Garden State.

A federal judge overturned the State Board of Elections decision last week to cancel the contest. WNYC's Brigid Bergin joins host David Furst to explain what it means for voters.

New Sounds
Week of May 4: This week, dance the cumbia in a premiere from Los Cumpleaños, and unintentional pandemic songs from Ghostpoet and Son Lux.
Read More

This Week in Politics: Is a Run for New York City Mayor the Next Move for Andrew Yang?

The former presidential candidate says he is "attracted" to executive roles. But is he really considering a run?

This Week in Politics: When Politics Can’t Go Door To Door

How DO candidates get face time with voters during a pandemic?

This Week in Politics: A New York City Budget with Deep Cuts Across the Board

With the city's finances falling off a cliff, Mayor de Blasio presented an executive budget with cuts across all city agencies.

NYC Mayor: School's Out Until September. NY Gov: Not So Fast.

Are they or aren't they closed for the rest of the year? That's the question many New Yorkers have about the public school system.

A 2006 pandemic plan warned that New York City could be short as many as 9,500 ventilators. But the city only acquired a few hundred -- and they were ultimately scrapped.

“Twelve to fourteen [bodies], in a 15’ by 15’ room, literally side by side on the stretchers. It’s horrible, horrible. It’s terrible.”

This Week in Politics: Phil Murphy on the Pandemic

A look at how the New Jersey governor's "we're all in this together" approach is playing out during the pandemic.

Maimonides Medical Center in Midwood is aiming to increase its capacity by 200 percent in the coming weeks.

This Week in Politics: Budgeting During a Pandemic

Gov. Cuomo and the New York legislature face a budget deadline as the COVID-19 pandemic demands full attention and drains the state's finances.

Music Lessons in the Age of COVID-19

Kids are home from school. But they're still getting music education.

As coronavirus cases continue to grow in the state and city, Broadway suspends productions and some museums are closing.

This Week In Politics: Bloomberg vs. The Rest Of The Country

New York City voters have had a lot of time to figure out what they think about Mike Bloomberg. But what about the rest of the country?

This Week in Politics: New Jersey's #MeToo Moment - The State "Really Needed This"

Two months after women described politics in the state as a toxic environment of harassment and assault, some see steps toward meaningful change.

The powerful chair of the New Jersey State Senate Judiciary Committee was named in a lawsuit filed this week by a woman who claims he was instrumental in her wrongful imprisonment.