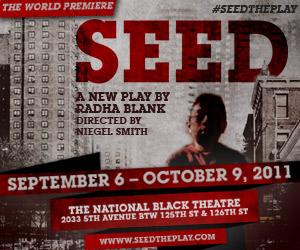 WNYC is a media sponsor of Hip Hop Theater Festival and Classical Theater of Harlem's production of the play SEED. A new play by Radha Blank and
directed by Niegel Smith.

Burnt-out social worker Anne Colleen Simpson decides to leave the field on a high note, with a book detailing her career, but when Chee-Chee, a gifted twelve-year-old from the ‘projects’ collides into her life, she’s forced to confront his young mother and the shadows of her past. Anne and Chee-Chee develop an unlikely friendship that leads to an explosive encounter threatening both their futures.

Infused with the vibrant rhythm and verse of Hip-Hop culture, Seed weaves through the fault lines of a gentrified Harlem, begging the question: How far are you willing to go to protect the future of a community and its children.