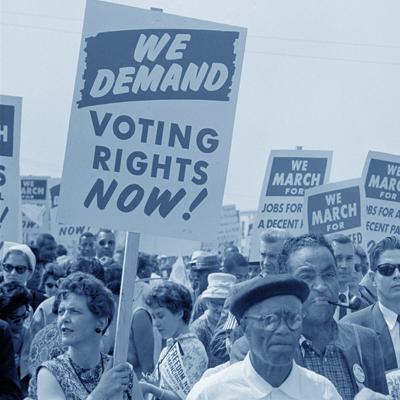 **Thank you for your interest in Hear Our Voices, Count Our Votes: MLK’s March Continues presented by WNYC and the Apollo Theater on Sunday, January 18, 2015 at 3PM. Due to an overwhelming response, reservations are currently closed. We will have a standby line for those who were unable to register online for this event. If space permits, we will admit patrons on the standby line after patrons who registered on line have entered.**

This year’s event will explore the 50 years since the passage of the Voting Rights Act of 1965. WNYC’s Brian Lehrer and MSNBC’s Melissa Harris-Perry will guide us through the past half-century and explore the significant moments leading to today’s democratic landscape in America.

This year’s event will also honor the legacies of the great civil rights leaders who we lost last year: Maya Angelou, Ruby Dee, and Yuri Kochiyama.

Rita T. Bender - Lawyer, civil rights activists and educator, and wife of Michael Schwerner, who was murdered along with James Chaney and Andrew Goodman by the KKK in Mississippi in June 1964

Darryl Pinckney - Author of Black Balled: The Black Vote and US Democracy

Baratunde Thurston - Co-host of Pivot TV's TakePart Live, CEO and co-founder of Cultivated Wit, author of How to Be Black