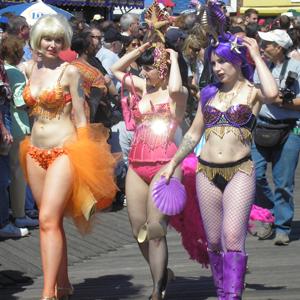 Dress up in your best underwater garb and head to Coney Island.

The Parade is followed by the Mermaid Parade Ball, a post-parade gathering where costumed parade participants can get together with each other and parade spectators to listen to live music, purchase raffle tickets, and watch burlesque and sideshow acts performed by some of New York City's hottest burlesque stars.