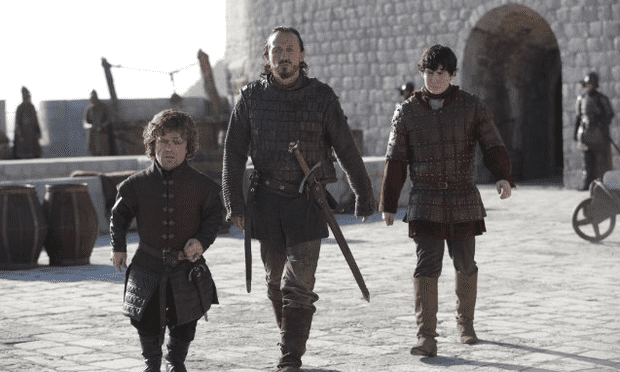 Are you still getting your head around the season five premiere of Game of Thrones? We'll help you get your head in the game: Make like Daenerys Targaryen and get ahold of some dragon eggs, hear how linguists invented Dothraki and listen to Fred Armisen tell Alec Baldwin why he loves GOT on an episode of Here's the Thing.

How to Make Game of Thrones Dragon Eggs for Easter

Let lifestyle and craft guru JacquieLongLegs show you how to celebrate the Game of Thrones season four premiere AND Easter all in one fell swoop.

Fred Armisen has always been ambitious; when he was a punk rock drummer, he recalls, he always "wanted much more."

Game of Thrones: How to Speak Dothraki

By Saul Gonzalez : Host, There Goes the Neighborhood: Los Angeles

The Scene: Los AngelesFrom KCRW's The Business, hosted by Kim Masters As it tries to keep up with increasingly savvy audiences, Hollywood hires experts to bring authenticity to its ...
Read More

Following Up: Is Television Better Now Than Ever?

Bob Thompson, director of the Center for the Study of Popular Television and professor of Television and Popular Culture at Syracuse University and author of Television in the Antenna Age: A Concise History, follows up the question of whether the quality of television programming is better now than it has ever been, and how we can decide.

Here (And There, And Really Everywhere) Be Dragons

As the supernatural enjoys a pop culture resurgence — from vampires to fairy tales — there's also been a firestorm of fascination with dragons. Fire-breathing dragons are central to the much-anticipated second season of the HBO series Game of Thrones, which opens April 1. And this year alone the mystical ...

Game of Thrones Fans Geek Out in Midtown

More than 100 fans lined up in Midtown on Friday to catch a glimpse of real-life props that are part of the HBO medieval fantasy series Game of Thrones.

Game of Thrones: The Pop-Up Book

Each episode of HBO’s Game of Thrones starts with a map of Westeros — as the camera sweeps over each kingdom, it sprouts castles, towers, and cities with beautiful precision. Matthew...