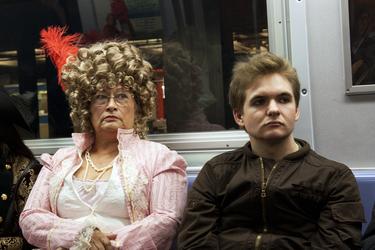 This was taken last Halloween. I got on the subway to get to the Halloween parade, but soon realized that there was more going on underground than there was at the actual parade.
For me, this photo looks like it could have been taken on any day of the year in New York, which is to say, the city is full of so many interesting characters. I also love the body language of the subway riders, they are cool and collected in their costumes, as only a New Yorker would be.