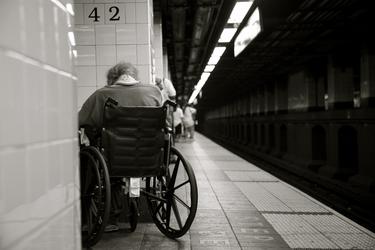 I took this photograph back in 2010 when I was living in Brooklyn. As someone who grew up in Europe, I was fascinated and in the same time frustrated by the sheer loneliness and poverty some of the New Yorkers live in. Among the wealth and glitter of this city, residents like this fragile, old, lonely, perhaps homeless person seem forgotten or displaced.
As a result of the socioeconomic problems of NYC, its subway system, contrary to its actual function, is not just a major transportation system but serves a lot people also as shelter.