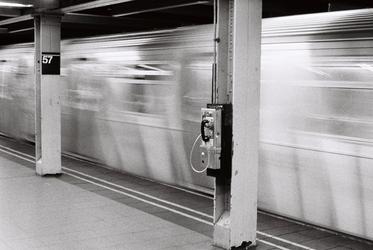 This was taken on my most recent trip to New York. I took it on an old film camera, a Nikon F3, the film was TRI-X 400. The pretentious version of 'what it says about New York' is that the almost otherworldly image of a train passing through the 57th Street station speaks to the transitory nature of life beneath New York's steets. The less high falutin' version is that this image captures, for me, a little of the excitement I feel when I visit New York, a sense of being alive to a phenomenal degree.